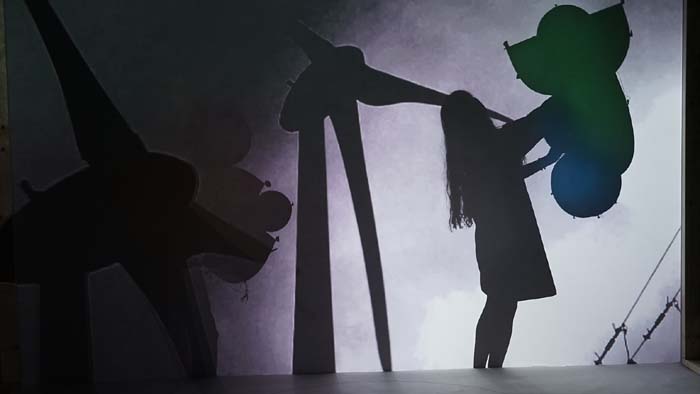 Image: Joan Jonas, They Come to Us without a Word

They Come to Us without a Word II presented in conjunction with Jonas’s U.S. Pavilion exhibition at the 56th International Art Exhibition of La Biennale di Venezia

PERFORMANCE
THEY COME TO US WITHOUT A WORD II
July 20, 21 and 22, 2015 at 9pm
Teatro Piccolo Arsenale, Campo della Tana, Castello, Venice, Italy
in collaboration with Teatro Fondamenta Nuove and the Università Iuav di Venezia (IUAV)

June 23, 2015, Venice, Italy — The video and performance art pioneer Joan Jonas has created a multimedia installation entitled They Come to Us without a Word, for the United States Pavilion at the 56th International Art Exhibition – la Biennale di Venezia, which was awarded a Special Mention, and is on view until November 22, 2015.

In conjunction with her U.S. Pavilion exhibition at the Venice Biennale, the MIT List Visual Arts Center in collaboration with Teatro Fondamenta Nuove and Università Iuav di Venezia presents They Come to Us without a Word II a new performance conceived and directed by Joan Jonas.  The performance features newly composed music by Jonas’s longtime sound collaborator, the American jazz pianist and composer Jason Moran. Moran will play live, accompanying Jonas for the performance.

Joan Jonas’s performance and her US Pavilion installation both evoke the fragility of nature in a rapidly changing situation. “Although the idea of my work involves the question of how the world is so rapidly and radically changing, I do not address the subject directly or didactically,” said Jonas. “Rather, the ideas are implied poetically through sound, lighting and the juxtaposition of images of children, animals and landscape.” The performance will feature reedited video footage from the installation in the U.S. Pavilion as well as performative elements developed from a three week artist led workshop conducted in June and July with students from IUAV.

Tickets for the performance can be purchased online at joanjonasvenice2015.com

Both artists are available for interviews.

Joan Jonas (b. 1936, New York, New York, USA) is a pioneer of video and performance art, and an acclaimed multimedia artist whose work typically encompasses video, performance, installation, sound, text, and drawing. Trained in art history and sculpture, Jonas was a central figure in the video and performance art movement of the late 1960s, and her experiments and productions in the late 1960s and early 1970s continue to be crucial to the development of many contemporary art genres, from performance and video to conceptual art and theater. Since 1968, her practice has explored ways of seeing, the rhythms of ritual, experiments with sound and the authority of objects and gestures.  The recipient of numerous honors and awards, Jonas’s most recent solo exhibitions include those at HangarBicocca, Milan (Fall 2014); Centre for Contemporary Art, Kitakyushu Project Gallery, Japan (2014); Kulturhuset Stadsteatern Stockholm (2013); Proyecto Paralelo, Mexico (2013); Contemporary Art Museum, Houston (2013); Bergen Kunsthall, Norway (2011); and Museum of Modern Art, New York (2010). She has been represented in dOCUMENTA in Kassel, Germany, six times since 1972, and has had major retrospectives at the Stedelijk Museum, Amsterdam; Galerie der Stadt Stuttgart, Germany; and the Queens Museum of Art, New York. Joan Jonas is a New York native and she continues to live and work in New York City. She received a B.A. in Art History from Mount Holyoke College in 1958, studied sculpture at the School of the Museum of Fine Arts, Boston, and received an M.F.A. in Sculpture from Columbia University in 1965. Jonas has taught at the Massachusetts Institute of Technology (MIT) since 1998, and is currently Professor Emerita in the MIT Program in Art, Culture, and Technology. In June 2015, Gregory R. Miller & Co. will publish the first comprehensive monograph of Jonas’s work, titled In the Shadow of a Shadow: The Work of Joan Jonas.

Jason Moran (b. 1975, Houston, Texas, USA) is a pianist, composer, and critically acclaimed jazz musician. In 2010 he was named a MacArthur Fellow and is currently artistic director of the Jazz section at the John F. Kennedy Center for the Performing Arts (Washington D.C.). Moran’s work includes an intense and lively series of projects and collaborations with visual artists including: Theaster Gates (with whom he composed the music for Looks of a Lot,) a performance presented in 2014 at the Chicago Symphony Center; a performance role in Stan Douglas’s film Luanda-Kinshasa; the soundtrack composition for Glenn Ligon’s film Death of Tom and his work with American artist Joan Jonas. Moran collaborated with Jonas on Reanimation, and the two also collaborated on the music for The Shape, the Scent, the Feel of Things, an opera performed for the first time in 2005 at Dia:Beacon, as well as, My New Theater: Reading Dante III , a work shown at the Venice Biennale in 2009. Jason Moran is one of the artists featured in All The World’s Futures the 56th International Art Exhibition – la Biennale di Venezia curated by Okwui Enwezor.

They Come to Us without a Word II is organized in conjunction with the United States Pavilion at the 56th International Art Exhibition – la Biennale di Venezia by the MIT List Visual Arts Center.

Thanks to Biennale di Venezia.