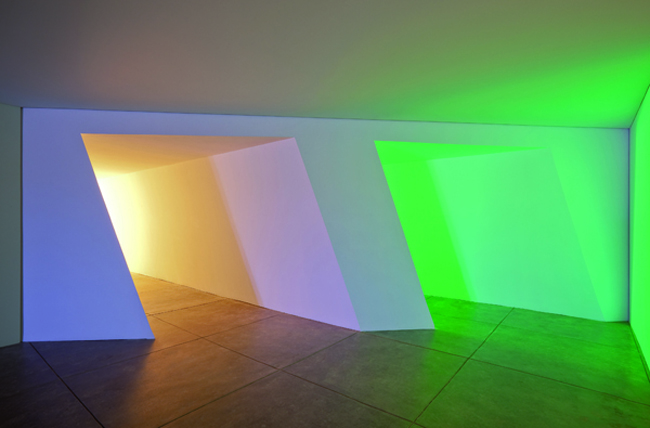 Make art, not pipelines
Get in on the Ground Floor

Essay by Donald Judd Written for and published in the exhibition catalogue:

Fluorescent lights, etc. from Dan Flavin, National Gallery of Canada, Ottawa, October 1969, pp. 27-30; reprinted in: Art and Artists; March 1970, pp. 45-48; Halifax, pp. 199- 200; Paris, pp. 334-336 (in French).
Three main aspects of Flavin’s work are the fluorescent tubes as the source of light, the light diffused throughout the surrounding space or cast upon nearby surfaces, and the arrangement together or placement upon surfaces of the fixtures and tubes. The lit tubes are intense and very definite. They are very much a particular visible state, a phenomenon. The singleness of isolation of phenomena is new to art and highly interesting. Irwin and Bell and a couple of others in Los Angeles are also interested in developing single phenomena. The dominance as an aspect of the fluorescent tubes is not as great as that of single phenomena in Bell’s and Irwin’s work. Most art, including mine, involves several things at once, none developed toward exclusivity. Art is generally more specific than it used to be; its visible aspects are more important but usually there is a comparative balance between the few main aspects. The dominance of one phenomenon, what the presently balanced would call imbalance, is a particularity of one thing. It’s very different from a particularity which is the sum of several things. I want a particular, definite object. I think Flavin wants, at least first or primarily, a particular phenomenon. The even, confined glow of the tubes, which is intense but not so much so as that of incandescent bulbs, is standard and not much changed by the different colors. The uniformity of the phenomenon and also of the length of the fixtures may be the coexisting situation for the considerable freedom in the disposition of the lights. The pieces vary a lot. There’s a nice looseness to the work as a whole and often to individual pieces, the room at the Kornblee Gallery for example.

It’s obvious that color as material and color as light are extremely different. Color almost always seems applied, except for raw materials and they’re seldom bright. Since the tubes are sources of light their colors seem given and unchangeable, and since as light the colors are much more visible than are material colors, their differences are conspicuous. Two juxtaposed painted whites are subtle; two juxtaposed white tubes are pretty obvious. There isn’t any difference between the light and the color; it’s one phenomenon.

The light is interrupted by the edges of the white fixture the tube is mounted on, causing a shadow which outlines the face of the fixture. If the fixture is on a wall the light dims gradually outward from the fluorescent tube. In a rectangle shown recently which spanned a corner, light cast from pink tubes and light from gold ones intermingled. The cast light was an important part of the piece. In the show at the Kornblee Gallery all of the tubes were green, giving the whole room green light. After a while natural light seen through the window seemed rose and the green seemed fairly normal. This diffuse or pervasive light isn’t the same as the cast light. I was impressed at the Kornblee show by the power and complexity of the combination of the three main aspects.

Some of Flavin’s pieces are as discrete as any painting or sculpture, requiring only a wall or a floor. Most use part of a room. The show at Kornblee was one piece involving the whole room; the show at The Museum of Contemporary Art in Chicago was one piece involving the whole space of the main floor of the museum. Both shows are among the best things I’ve seen. In both, the rectangular space was articulated by the lights. These weren’t discrete. They were interior articulation but not interior structure; they made an interior exoskeleton. The room at Kornblee, once a living-room, was articulated according to its two doors, a narrow window and a fireplace centered on one wall. The tubes were slanted on either side of the doors, for example, and flanked the one long empty wall. The piece used a mediocre specific place. The museum piece was different. The space is mainly a very large room with two central walls enclosing some functional areas and so is a vague and general standard exhibition space. The eight-foot fluorescent tubes, all vertical, were disposed in a scheme upon all of the walls regardless of their position or length. The scheme was devised for the variability of the walls. In the center of each wall were adjacent pink and gold tubes, the pink to the left. Two feet to the left was a gold tube and two feet to the right was a pink one. Four feet to the left of the gold tube was a pink one and so on. The distance increases two feet each time and the colors alternate. Except for the two centered tubes the cast color was just the basic area of a tube.