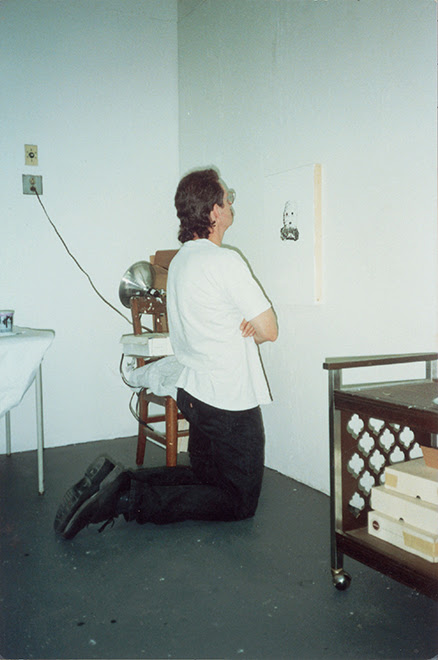 “When I was 18 I was sent to a two year commercial photography school that happened to be in the basement of an art school. My first two girlfriends were painters. My first roommate was a painter and sculptor. I’ve been collecting art for 56 years. I’d like to live forever because of art.”

Luhring Augustine is pleased to present White Trash, an exhibition of artworks from the personal collection of Larry Clark.

While often described as a photographer and filmmaker, Clark thinks of himself simply as an artist.  His practice includes many different techniques and media and is inspired by the urban atmosphere, youth subcultures, as well as the artists whose work he has long followed and collected.

A New York resident since the late 1970s, Clark maintains a loft in Tribeca which houses much of what he has acquired over the years. He is an obsessive collector who does not limit his interests to art. The loft is an ever-changing montage of forms and images: film and music posters, photographs, paintings, sculptures, skateboards, design and vintage objects, furniture, books, and antique walking canes. There is as much “high art” as there is art made by unknown artists; and of course, Clark’s own work is seen throughout the space.

Much like him, the artists he collects are renegades who are part of the avant-garde. There are numerous threads throughout the collection that reflect the era of postmodern art: the use of photography and appropriation, conceptually driven practices, and a focus on social commentary. Several works present a clean graphic aesthetic, a number of which – such as those by Prince, Wool, and Holzer – are text based. A passion for painting is also clear; there are meticulously rendered paintings by artists such as Webster and Andoe, along with expressive abstractions by Smith and Gilroy. Clark greatly admires creativity in others and when he discovers an artist he likes, he collects their work in depth over many years.