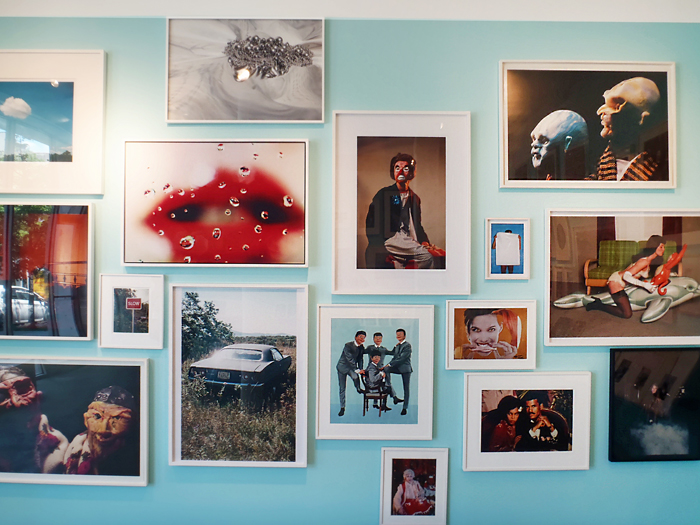 Summer of Photography at Carolina Nitsch Project Room hosts a conglomeration of images depicting the idiosyncratic, sexualized, and commodified America of the 20th and beginning of the 21st centuries. It features photographs by iconic, world-renown artists such as Ed Ruscha, Cindy Sherman and William Eggleston. An assortment of white frames in varying dimensions is masterfully arranged within a small space plastered with an aquamarine blue hue. The inconsistent size of the images grants each photograph even prominence, as none overpowers the room, but rather each harmoniously and rhythmically balances the other. This peak-trough orchestration mimics the movements of the ocean, diffusing an atmosphere of curiosity and exploration across the space. The photographs encompassed are optically as vivid as is their visual content; bright colors complement images of the deranged physicality and peculiar beauty that is the authentic American experience. Specifically, sexuality is emphasized as both a suggested and literal vehicle to strip the nation down to her elements- elements that are both intentionally and ironically manipulated into patterns via symmetry and repetition. Hereby, even the eccentric, queer subject becomes a commodity.  As such, this beautifully curated selection represents a set of artists whom are mutually iconoclasts and leaders; burners and authors; rebels and, well, conventionalists.