There is no “I” in self-taught 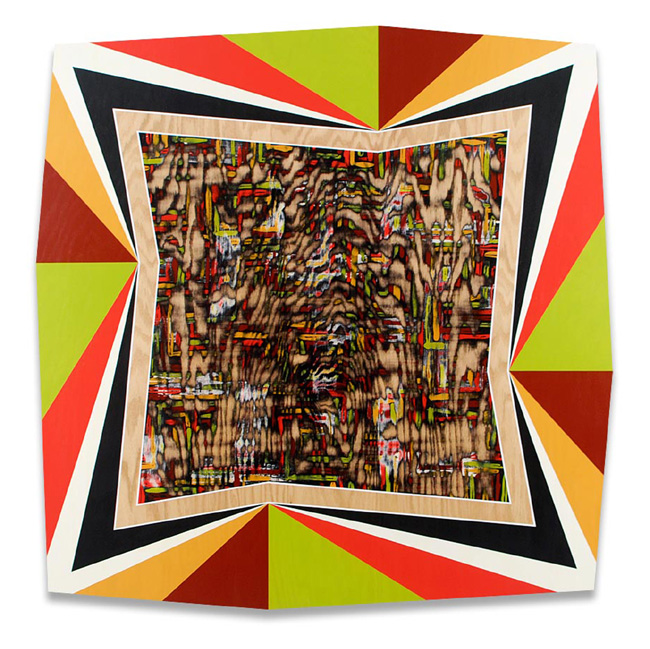 “What we have to learn to do, we learn by doing.”  ~ Aristotle

What is inspiration?  Where does it come from?  For J.T. Kirkland it was a fortuitous trip to Musee D’Orsay on a hot day in Paris.  Kirkland, who was studying and later received his degree in Economics, recalls this visit as his “ah ha” or “got it” moment.  He remembers being absorbed by the Impressionist and Post Impressionist works of Van Gogh and Monet.  From this moment on J.T. was hooked, purchasing a sketchbook and exploring any museum he could find in Europe.  He dove right into the art world headfirst.

Entering the Shockoe Arts Space (Richmond, VA) I was immediately surrounded by J.T.’s paintings, 78 of them to be exact.  There are different bodies or series of paintings, although they are all titled Subspace, with a corresponding number denoting the works individuality. Some works are angularly shaped surfaces; they range in scale and seem to be arranged loosely as series. A number of works align with a Colorfield painting style, where the surfaces are fields of stained or painted flat and one color areas and consistent.  Others seem to be more closely related to Expressionism, where the painting is more emotionally charged though its brushwork strokes. There are works that leave the woods natural grains exposed, as J.T. says is his love of the natural forms found in wood, which was a possible influence of his dad’s woodworking.  There are works that are more hard edge geometric abstractions.  While there is a variety of mark making devices the exhibit as a whole is incredibly connected by bright color, surface and regard.  As Ryan Lauterio, the director of the space proclaimed, “it’s loosely a mid-career survey.”

Wandering around the space I’m struck by the vastness and compression of the exhibit and the individual works.  It is like being in a Hubble Telescope photograph surrounded by galaxies all around.  Subspace 154, and works in this series completely exemplify this compression. There is a pressure that exists between the outer parts of the painting, where the painted geometric area appears to turn towards the “voidish” center.  The compression and twisting towards the middle is as if we are being vacuumed into a black hole.  The pressure created is palpable and pulls the viewers into the work

An artist friend of mine, Christian Bonnefoi, once told me, imagine that our making, as artists, are all like circles or ellipses. These circles will always bisect with different artists, or creative movements of others, that we are inspired or influenced by, however brief and then go the way of the individual.  Because of his path, J.T. in many ways has a no holds barred attack of painting, one that allows an uninhibited practice.  There is a certain joy to this and to this exhibition, you can feel the excitement and the love he has for each piece. But without inspiration, influence and risk art gets left behind.  And as J.T. knows part of risk is being willing to take that leap.