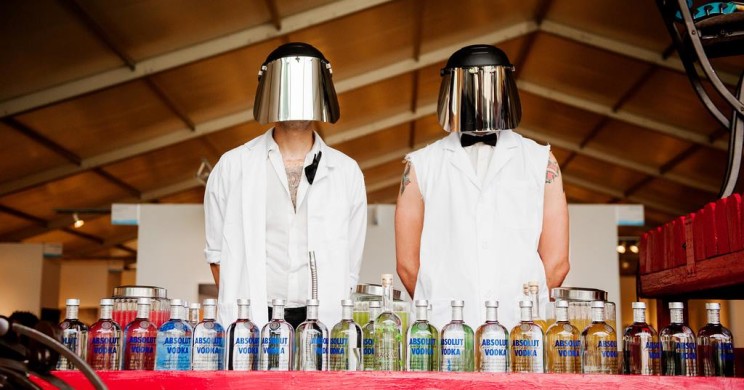 There were forty galleries that participated at artMRKT.  From New York, to Beverly Hills, to St. Petersburg they all migrated to a singular billowing white tent with one collective goal in mind: to sell.

I walk in a little unsteadily. The tent hums with activity. I feel as if I have just entered a hive—a highly chaotic, yet innately systemized heterogeneous structure. Each gallery is a single honeycomb, and within each of these chambers lies a hampered, assiduous little bee. Some of them nestle into their cells. Their delicate wings arch back, as their forelegs rest upon sleek white desks. The others, who don’t appear as self-satisfied, dart around the peripheries of their designated cubicles; their antennas begin to twitch if you appear just a little too interested. The space is permeated with a continuous buzz, and before I can help it I’m buzzing too.

One relatively young artist attracted my attention. A Philippines native, Miguel Libarnes uses his mixed media objects as surfaces that engage and address the evidential dichotomy between his very catholic upbringing, and his self-proclaimed queerness.  Vessel, which was amalgamated with Fuchs Projects at artMRKT this year, quite obviously illustrates this duplicitous ethos. Libarnes employees a lenticular print method, which produces images that appear to have depth—therefore transforming the two dimensional spatial limits of the photograph into a three dimensional object. Two different images are spliced and then rearranged on a substrate. Libarnes interlaces images taken from vintage 1970’s gay pornographic magazines and vintage photographs of archetypal catholic sanctuaries.

The piece, in and of itself, was fine in that it was executed successfully, and will quite possibly attract critical attention and become part of ongoing dialogues concerning the body and its relation to queerness in contemporary art. However, as a visitor to artMRKT, this piece immediately takes on another dimension solely on the basis that it is being exhibited at an art fair. Over the past ten years, there has been increasing discourse surrounding the negative ramifications of the multiplying number of art fairs around the globe. Art fairs have become notorious playgrounds for the bougie and bored. For those who want a very superficial taste of what’s “happening right now.” A space that inflates the prices of artworks that are mediocre at best, and conditions artists to produce work on the principle that it is to be sold above all else.

To many art critics, galleries and museums, art fairs have become “The Real Housewives” franchise of the art world. The low-brow, flashy step-child of the art market—the remnants of the over stimulated, botoxed, Kardashian crazed world we live in today.  Art fairs begin to resemble a carnivalesque space, where the illegitimate becomes acceptable, and the Bravo “Housewife” in all of us comes out and mingles with the bawdy, the trashy, the glitzy, and yet ever so tantalizing carnival.

The modern art fair is a drag show. Rather, a Bahktinian carnival where the spectator’s presence is concurrent to the performance. When you enter that white tent, and you engage with the artwork, reside on those oversized chaise lounge chairs, and even accept a glass of some brand of prosecco that sponsored the event—you’re there, so why the hell not!—you immediately become an active member of the performance. You go in with the intention to just observe, but even being an observer is part of the show. In perfect Brechtian fashion, we simultaneously become one with the performance, even though we are not on stage, so to speak.

We have been conditioned to define our sense of self against the art fair.  However, within the space our self-awareness is in fact a conglomeration of our preconceived notions of art fairs and our body’s personal response to the experience. Mired in art culture as too flamboyant and unfathomably gauche, the art world’s defining itself against the art fair subverts the former’s disapproving gaze.

Because even the art world revels in the trash. We all indulge some kind of guilty pleasure. We all like to think that the woman in the floppy white hat and over sized Chanel sunglasses, who seems really close to paying way too much for a photograph of a hermit crab eating a shoelace, is “one of those people” who buys into that whole “art fair thing.” But you’re still the guy standing next to her with that glass of free prosecco.