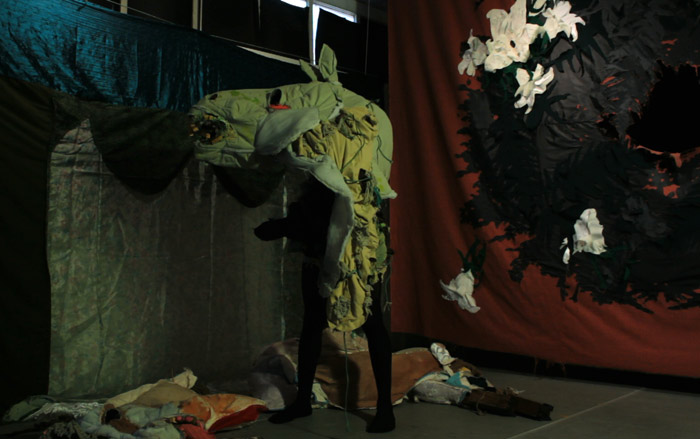 Wild and Free, performance still courtesy of the artist.

Leah Oates: How did you become an artist and what is your family background?

Brian Getnick: Art for me is a way of joining thoughts that might not belong together in any other discourse. When you make art, you can actualize these thoughts into forms and create models where they are indisputably united. I like that stubborn insistence.

As far as my family is concerned, I’ll start with Halloween. We would start sewing costumes in early September. There’s a picture of me as an 8-year-old howling at the camera in a green tunic, swim goggles, witch nails and a felt rat sewn to my chest. Obviously, I was rat-man. I almost never wanted to be a recognizable character. When the holiday was over, I would make small figures with fabric and florist’s wire drawn from the world I had inhabited in costume, playing out stories around the house and in the woods. I never wanted the fantasy to end.

BG: Play is my process. When I begin working on a performance, I make an object, mask or costume and start activating it by moving inside it or handing it off to a collaborator. For The Pest Horse, a performance I’m doing with Bryatt Bryant this August, I hand him the horse bodies and say, “Give me two performances.” It can be as simple a directive as that. He intuitively knows how to make something come alive and find out how it wants to behave. We record what he comes up with, we try it again, and eventually whittle it down.

LO: Where did you go to school and how did that effect your artistic development?

BG: I got my MFA in the Material Studies Department at the School of the Art Institute of Chicago. The department’s philosophy of encouraging the intuitive and pleasurable process of experimenting with materials gave me the breathing room to grow. Five years after getting my MFA, I went back to making plays with figures and costumes.

LO: What are the ideas in your work?

BG: Memory, control, freedom and the body. In the total sensorial experience of my performance work, I want these subjects to weave in and out of visibility and articulation. My first desire is to mesmerize the audience with how the sculptural bodies that I make come alive, later fall apart, and how they behave in general. What they interpret this interplay to mean is up to them. That is a type of research that I couldn’t get if I simply installed my costumes as static sculpture in a gallery. I could only theorize about what the audience’s response would be. When I first moved to LA, I performed exclusively in queer nightclubs. The audience would shout back, walk away, and participate unexpectedly. No one felt cowed into submission by the pressure to interpret. They came to the club for pleasure and I wanted to give it to them. If they walked away entertained I was happy. If they absorbed some of the nascent content later, that was even better.

LO: You are a performance artist who also creates sculptural objects. How is performance different from making objects conceptually for you as an artist?

BG: My sculptures often take the form of theaters nested inside other things: a hog’s head, a prison, or a decrepit airport, for instance. I think of the theater’s architecture as a body or an extension of the architect’s body, which implies that the audience is being digested by the play. My performances are the inverse; all the fantasy is attached to the body and surrounded by the audience.

LO: What is it like to be observed as a performing artist, and to also be observing the audience?

BG: It feels like a political moment to be the center of attention. I feel that pressure. What am I saying in this arena? What are my values? I think this is why I tend not to perform as myself but as other things and with other people. I’m not interested in presenting a singular representation of selfhood. I’m not interested in the audience reifying me in a cult-like way. I’m interested in showing the audience a system of reorganizing or exploding the self into multiple, independent beings. I also prefer to have the audience mobile and unseated if possible, so that they can choose to see what they want, or to leave.

LO: What kind of reactions and impressions have your performance works engendered from audience members?

BG: My friend told me once that she thought of my performances as “home-school kabuki theater,” and I like that. My work has a lot of absurdist elements, so laughter is one of the first responses I get in galleries. Artists come to galleries prepared to scrutinize forms and analyze their meaning. I get this too. It’s hard to shut off the politic and history-seeking part of my brain, but with performance, the opportunity is to experience art bodily. The analysis is important, but it can happen later, or at certain moments within the total experience.

LO: Why do you think art is important to people and to the world?

BG: Art offers models of ways of being that are at best, deeply, internally researched. This is so important in the era of social media determined identities. I’m speaking here not of all art which, of course, can use social media as a material or a vehicle, but specifically of the fabrication of objects and of live performance. Solid things are derived at a slower rate and that gives you time to fantasize about an audience or ignore the possibility of an audience. I don’t think that can happen when you make things for the web.

LO: What advice would you give an artist who has just arrived in NYC and who is not sure where to begin?

BG: I would say: Consider measuring the energy expended on seeking prestige with the effects that it has on your body and your creative output.  Instead, find a community of people who will support you making your work and find places where you can experiment freely. I live in LA where the rent is low and the pay-off for experimentation and collaboration is very high. What I would suggest to the New York performance artist is to visit LA. I run a performance art journal and platform called Native Strategies with my partner Tanya Rubbak. If you’re a performance artist reading this and are thinking of visiting LA, look us up if you want an orientation. nativestrategiesla@gmail.com

LO: Who are you favorite artists and why?

BG: There are so many. I love Asher Hartman who is more of an experimental theater director and works closely with an ensemble of perfomers who have worked together for over five years. Hartman tends to collide narratives and switch the identities of his characters in the script. The language he uses is often very dense and chaotic but because of the strength of his ensemble, the abstraction in his narrative(s) become grounded through the obvious humanness of the actor’s relationships. I just saw Glass Bang by Hartman, which is about violence, real estate, and ghosts. I also love Mike Kelly’s Day is Done project. He made this parallel universe of ghosts, vampires, virgins, pagan rituals, and bits and pieces from a pseudo biography all extrapolated from high school yearbook photos. It’s a template for someone like me who starts his process by making objects and then finds the performances inside them. I also have found precedent in his writing for the way I treat subject matter, how it comes in and out of focus in my work. In an Art21 interview he talks about beauty in relationship to a deliberate confusion between different contents: “I think what I make is beautiful … because terms and divisions between terms are confused, and divisions between categories start to slip. That produces what I think of as a sublime effect, or it produces humor. And both things interest me.”

LO: What are your upcoming projects?

BG: I’ve started color-coding my yearly output. What I’m presenting at Station Independent Projects this summer is the culmination of a year’s production of green performances and objects. I realized I was coloring work in 2012 when I was making Memories, a performance in which a big puppet’s limbs and head are controlled by dancers and musicians in blood red costumes.  I decided to research how color resonates for my work by starting this year by consciously choosing a color.

I think of intuition as faith in finding substance in darkness. For the next several years I’ll be coloring that void until I have the complete works of the rainbow.