David Goldblatt The Transported of KwaNdebele at Pace/MacGill Gallery 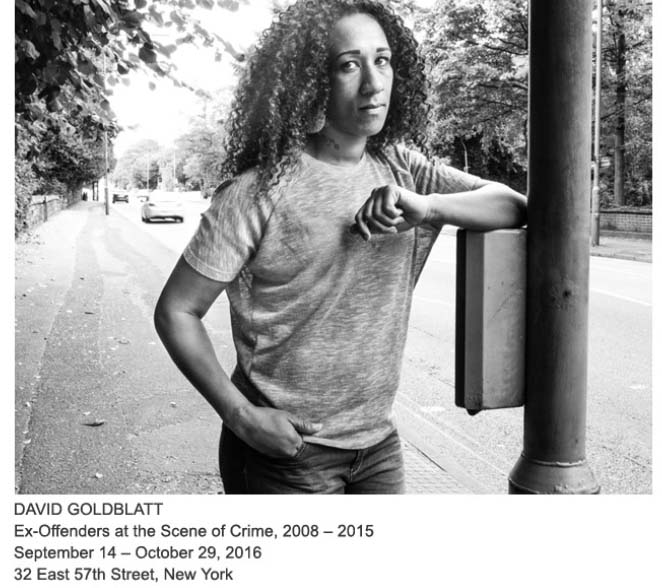 New York, August 17, 2016 – Pace/MacGill Gallery is honored to inaugurate its U.S. representation of acclaimed South African photographer David Goldblatt with an exhibition of photographs from two series, The Transported of KwaNdebele: A South African Odyssey, 1983–1984 and Ex-Offenders at the Scene of Crime, 2008–2015. The exhibition opens on September 14 with a reception for the artist from 5:30 to 7:30 pm and will be on view through October 29, 2016.

For over 60 years, David Goldblatt has documented the social and political developments of his native South Africa with a critical yet compassionate eye. Drawn “to the quiet and commonplace, where nothing ‘happened’ and yet all was contained and immanent…,” Goldblatt photographs the complexities of everyday life to reveal the far-reaching effects of apartheid and the post-apartheid conditions that continue to impact the country’s social fabric to this day. As Ingrid Sischy writes in her introduction to Kith, Kin and Khaya: South African Photographs, “David Goldblatt is a true misfit in the history of photography. A stand-out whose commitment to the medium is epic. He is one of a kind, and his images of South Africa, taken from the 1940’s and still going, will only be more reverberative as time goes on.”

Goldblatt’s photographic essay on homeland transport, The Transported of KwaNdebele, 1983–1984, illuminates the oppressive geographic displacement imposed by apartheid. Commissioned for the Second Carnegie Inquiry into Poverty and Development in Southern Africa, these photographs depict the commuting workers of KwaNdebele, who spend between 3 1/2 and 8 hours each day traveling to and from their jobs in the metropolitan city of Pretoria. As apartheid policy required the segregation of black South Africans in tribal Bantustans or homelands, millions were forcibly relocated to remote, rural settlement camps that lacked employment opportunities. Heavily subsidized bus and rail services were established to facilitate the movement of workers between these camps and their workplaces in the country’s white economic centers.

Goldblatt’s images follow KwaNdebele’s nightriders through their daily ritual of interminable, overcrowded commutes on dusty, rutted roads and render visible their physical and psychological experiences of alienation and dislocation. The bus ride alone speaks powerfully to the abhorrent conditions which so profoundly concern Goldblatt.

Affected by the ubiquity of violence and fundamental lawlessness in South Africa, where crime rates are among the highest in the world, Goldblatt sought to look past statistics and expose the humanity of perpetrators in his series Ex-Offenders at the Scene of Crime, 2008–2015. Through prisoner rehabilitation organizations, he approached former criminals or ex-offenders on parole and photographed them at the life-changing sites where their crimes occurred. The gripping portraits are accompanied by personal narratives, summarized from interviews with the artist, which recount the subjects’ stories and felonies. As Goldblatt explains, his pictures contain no social agenda: “My interest in ex-offenders arises from a wish to know who are the people who are doing the crimes and to get a sense of their life and how they came to crime. Could these people be my children? Could they be you? Or me?” In 2012, at the invitation of the West Bromwich based community arts center, Multistory, Goldblatt expanded his project to include ex-offenders in England’s Black Country.

David Goldblatt (b. 1930, Randfontein, South Africa) began working as a full-time photographer in the early 1960s. He has published numerous monographs of his work and is the recipient of the Infinity Lifetime Achievement Award from the International Center of Photography (2013), the Henri Cartier-Bresson Award (2009), and the Hasselblad Foundation International Award in Photography (2006), among other distinctions. In 1989, Goldblatt founded the Market Photography Workshop in Johannesburg to provide further education in visual literacy and photographic practice to disadvantaged learners during the apartheid regime.

Goldblatt’s photography has been the subject of solo exhibitions worldwide at venues such as The Jewish Museum, New York (2010); the New Museum, New York (2009); and the Museu d’Art Contemporani de Barcelona (2002). He was the first South African to be given a solo show at The Museum of Modern Art, New York in 1998 and was one of the few South African artists to exhibit at Documenta 11 and 12 (2002; 2007) in Kassel, Germany.

His photographs are represented in institutional collections around the world, including the Bibliotheque Nationale, Paris; the Fotomuseum, Winterthur; the J. Paul Getty Museum, Los Angeles; The Museum of Modern Art, New York; the National Gallery of Canada, Ottawa; San Francisco Museum of Modern Art; the South African National Gallery, Cape Town; the Stedelijk Museum, Amsterdam; and the Victoria and Albert Museum, London; among others.

David Goldblatt is presented in association with Goodman Gallery, Cape Town and Johannesburg. For more information about the exhibition or press requests, please contact Margaret Kelly at Pace/MacGill at 212.759.7999 or margaret@pacemacgill.com. For general inquiries, please email info@pacemacgill.com.

Images:
3:15 am. Going to work: The Wolwekraal – Marabastad bus is licensed to carry 62 sitting and 29 standing passengers, 1983
Blitz Maaneveld at the Terrace, Woodstock, Cape Town, where he murdered a man with whom he had been gambling, 7 October 2008
© David Goldblatt

One of the world’s leading photography galleries, Pace/MacGill has been dedicated to advancing fine art photography for over 30 years. Known for discovering artists, representing masters, and placing important collections and archives into major public institutions, Pace/MacGill has presented some 200 exhibitions and published numerous catalogues on modern and contemporary photography. Founded in 1983 by Peter MacGill, in collaboration with Arne Glimcher of Pace and Richard Solomon of Pace Editions, Pace/MacGill is located at 32 East 57th Street in New York City.