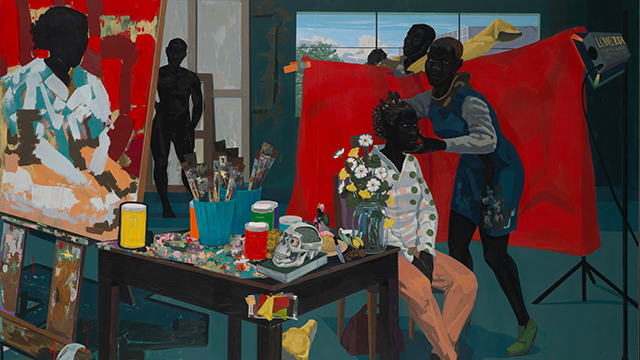 This major monographic exhibition is the largest museum retrospective to date of the work of American artist Kerry James Marshall (born 1955). Encompassing nearly 80 works—including 72 paintings—that span the artist’s remarkable 35-year career, it reveals Marshall’s practice to be one that synthesizes a wide range of pictorial traditions to counter stereotypical representations of black people in society and reassert the place of the black figure within the canon of Western painting.

Born before the passage of the Civil Rights Act in Birmingham, Alabama, and witness to the Watts rebellion in 1965, Marshall has long been an inspired and imaginative chronicler of the African American experience. He is known for his large-scale narrative history paintings featuring black figures—defiant assertions of blackness in a medium in which African Americans have long been invisible—and his exploration of art history covers a broad temporal swath stretching from the Renaissance to 20th-century American abstraction. Marshall critically examines and reworks the Western canon through its most archetypal forms: the historical tableau, landscape and genre painting, and portraiture. His work also touches upon vernacular forms such as the muralist tradition and the comic book in order to address and correct, in his words, the “vacuum in the image bank” and to make the invisible visible.

he exhibition is made possible by the Ford Foundation, Kenneth and Rosalind Landis, and the H. Tony and Marti Oppenheimer Foundation.

Additional support is provided by The Andy Warhol Foundation for the Visual Arts.

Courtesy of  The Met Breuer