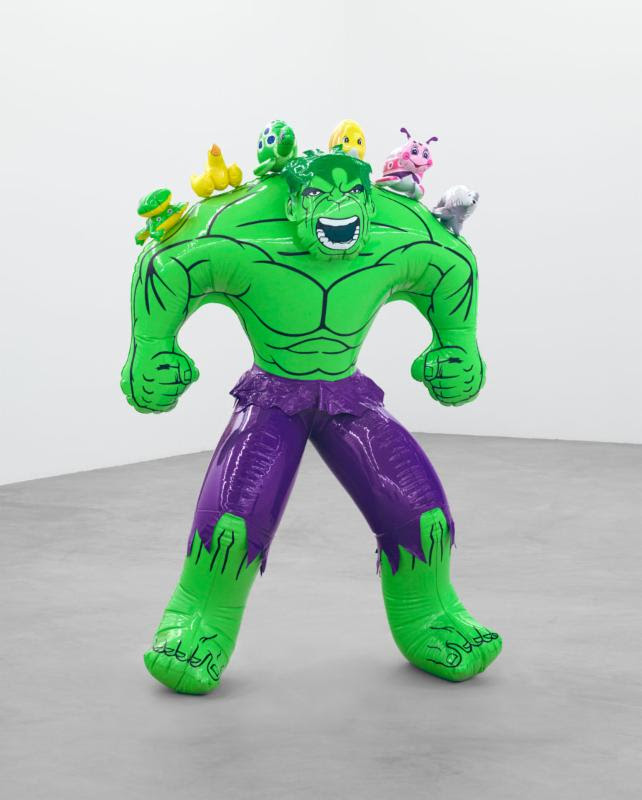 Hulk Elvis represents for me both Western and Eastern culture, a sense of a guardian, a protector, that at the same time is capable of bringing the house down.
–Jeff Koons

With sources as diverse as children’s art, comic book characters, and figures from classical antiquity, Koons draws a common thread through cultural history with works that attempt to touch the core of the human psyche. Working through conceptual constructs including the new, the banal, and the sublime, his art has evolved from its literal, staid beginnings in readymades to baroque creations that extol innocence, beauty, sexuality, and happiness in confounding combinations of abstraction, figuration and sumptuous effect.

Works from the ongoing series Hulk Elvis range from precision-machined bronze sculptures–inspired by an inflatable of the popular comic book hero and extruded in three dimensions–to large-scale paintings that dazzle with energy and exactitude yet mystify with complex permutations and combinations of figurative and abstract elements. The sculptures, whose polychromed surfaces mimic the gloss of vinyl inflatables, pair the Hulk superhero with incongruous props: a wheelbarrow filled with live flowers, a crew of inflatable toy animals, a precise replica of the Liberty Bell. In Hulk (Organ) (2004-14), keys, pipes, and a pedalboard jut out from the figure’s torso, legs, and shoulders; as the title suggests, the sculpture doubles as a fully-functioning instrument. For Koons, the character not only represents Western comic book culture, but also Eastern guardian gods: “They’re there as protectors, but at the same time they can become very, very violent…The Hulks are like that, they’re really high-testosterone symbols.”
In Hulk Elvis paintings, a charged mix of nudes and inflatable animals jostle against realistically rendered landscapes, magnified gestural brushwork, and underlying dot screens. Titles–Landscape (Waterfall II) (2007), Couple (Dots) Landscape (2009)–string together dominant compositional elements. The exuberance of image and texture is rendered, paradoxically, with an uncanny level of precision into a wealth of smooth, vivid detail, and images are manipulated and interwoven into volatile palimpsests of color and form. In these spectacular pictorial inventions–which reject any attempt by the eye to find a resting place–silhouettes slice through multiple layers, contours of images surface rhythmically across the field of vision, and forms loom and recede in the swirling fervor of color and line.