The Fidler of Half Moon Bay 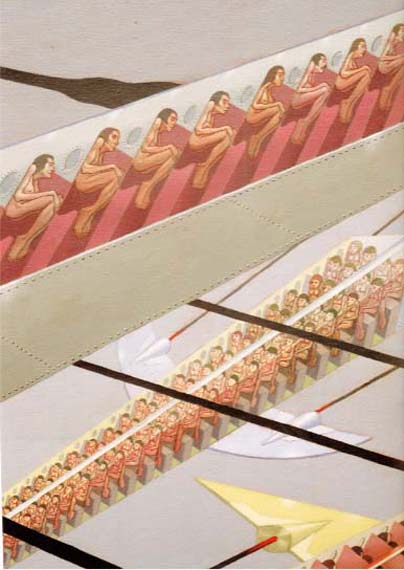 The Fidler of Half Moon Bay
By Tony Zaza, The Roving Eye

Irving Norman fights the corporate slagheap. He fought Franco in 1938.  He missed
WWI & WW2.  Too old for Vietnam, he fought within his canvases.  Too too over-the-
top to be commercial, too too obvious to ferment action, missing the  abstract
expressionist mainstream, Norman’s work got no respect until 1989.
He’s Orwell with a paintbrush, drawing was not intense enough. Looking more like
an “outsider” artist rather than the social muralist he really effects, Norman just
carried on in his Half Moon Bay studio psychically cleansed by the California
sunsets.

The canvas is populated with victims of progress and conformism.  They are so busy
they seem the work of a compulsive neuveau erotical.  The show at Michael
Rosenfeld Gallery feels like a room filled with nightmares.  But someone needed to
leave this kind of  cave painting behind to poke the conscience of the Millenials
before they blankfacedly  give away the rest of the civilization.

You don’t need too much intellectual skill to get Norman’s messages. They are quite
literal. His work has been labeled as a type of surrealist offshoot. But it is a clever
hieroglyphic about  the history of cruelty and primitivism. It’s a neverending story of
PaleoSociety.  It’s fun just to navigate the maze of imagery and discover private
vanities and conceits. His work is a Jewish-American translation of Italian Futurism. 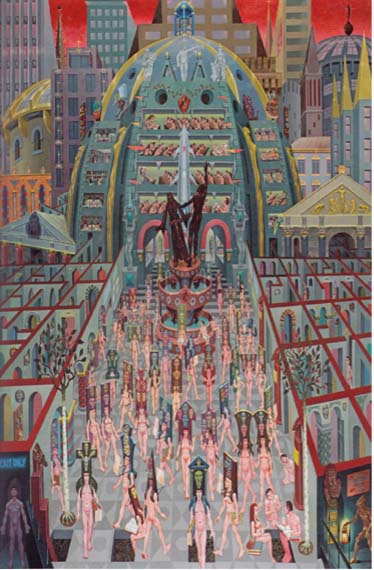