In his first solo exhibition at Samuel Freeman in Los Angeles, The Four People You Meet at Every Drug Deal, Jibade-Khalil Huffman brought his viewer into a world of myriad, reflecting surfaces; a coreless expanse of language and image that flitted over the face of something unutterable. Huffman showed work in a range of media including video installation, five-channel slide projection, and still photographs. It was also clear that as an accomplished writer who is the author of two books of poetry, he takes a special pleasure in words. In the video Working Title (all works 2013), Huffman austerely animates one of his poems with alternating block colors on the screen, which change with each line of the text. Blending a first person narration that weaves around a dream, a script, a film, and various characters’ pasts, with humorous aphorism (“All spiders/are related to Spiderman”) and alliterative association (“Lecture/Lecturn/Lantern/Llwelyn”) the presentation highlights the flatness of language, but also the suggestive, illusionistic power that resides right on its surface.

The conception of language as something fundamentally manipulable and playfully nonsensical, concerned more with itself than the shadow of its physical referent, also applies to Huffman’s visual sense. Google Image Search: Virginia Wolff The Sea The Waves is a photograph whose title—ostensibly a pun on the wave-like ripples of gingham fabric the work depicts—evokes the immaterial sphere of the internet, wherein terms and pictures are interchangeable, often incomprehensibly so. The photo was one of a series of close-ups, most of them of fabric, that are rendered as kinds of visual endgames, barriers to deep space. Huffman undermines the promise of a photograph as a portal into three-dimensions, instead favoring a slippery façade that falls somewhere between transmutation and abstraction. In Venice, for instance, what appears to be a deeply rose-colored reflection off a window gives way at the bottom edge of the picture to patches of grass, conflating exterior and interior, and destabilizing perspective. 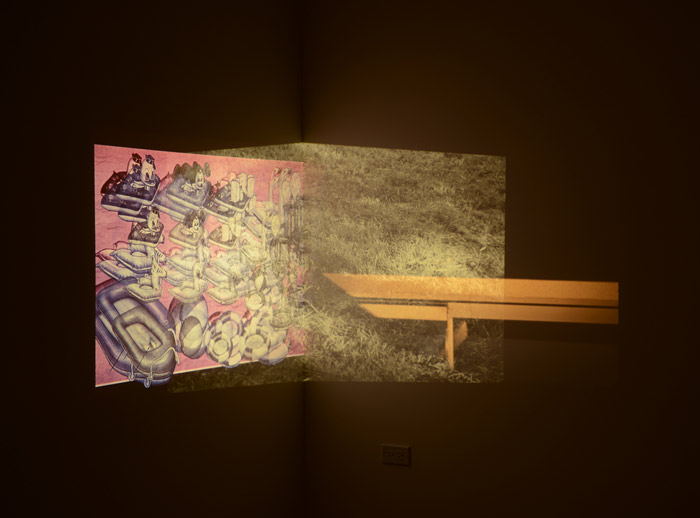 This theme was further explored—and exploded—in the ambitious three-channel video installation, Lake Overturn (a rare type of natural disaster that occurs when a lake becomes saturated with gas and erupts). Here, Huffman finds an apposite metaphor for spacelessness in the workings of Hollywood. The installation cuts between placid, seemingly commonplace shots of Los Angeles, following the route of a movie location scout played by the actress Claire Titleman, and mixes in clips from classic horror and apocalypse films like The Fog and Falling Down. Huffman rhythmically employs close-ups, fast cuts, voiceover, subtitles, and opening credits, combining Titleman’s spoken inner monologue with lines of text on the screen and names of made up movies (which are particularly great) starring both real Hollywood actors such as Cicely Tyson and Rodney Dangerfield as well as poetic constructs (“Staring: A Man I Once Knew”). The piece reaches a cacophony of collage, collapsing time and place, perpetually restarting and interrupting itself, continually obliterating landscape.

Perhaps it’s because of this complexity that the room Lake Overturn played in felt slightly over-installed: a sculptural object made of metal studs, weighted with sandbags, and hung with lovely, almost charcoal-like photographs of flowers blocked one of the projection screens. This was surely a nod by Huffman towards further obfuscation, but in this case, the videos seemed rich enough not to require it.

On the other hand, The Forms of Love, a five-channel slide projection aimed at a separate corner of the gallery’s wall was flawlessly scaled and executed. There was a luminous, prism effect of the numerous slides (a combination, among other things, of found, vintage illustrations and color and black and white photographs taken by Huffman of both rural and urban landscapes) bending on the wall’s edge, overlapping, and infusing one another. While it echoed concerns of other works in the show—with the individual slides becoming almost like words, shuffled around into different formations, lushly intertwining, or awkwardly colliding. The heaving physicality of the projectors countered the airy surface of the images in this piece, offering that, somewhere, gravity still exists.