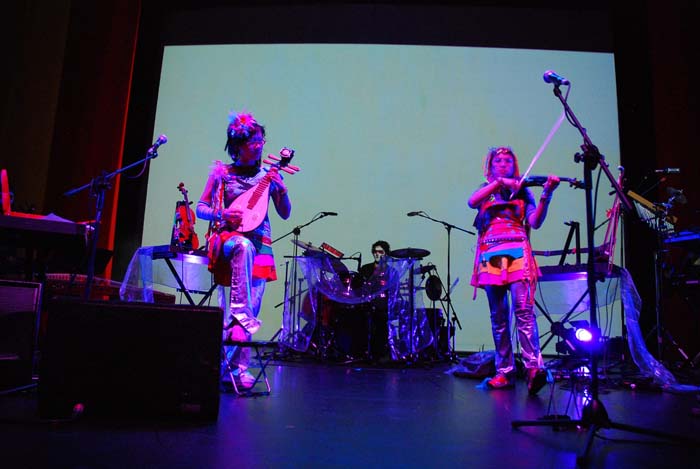 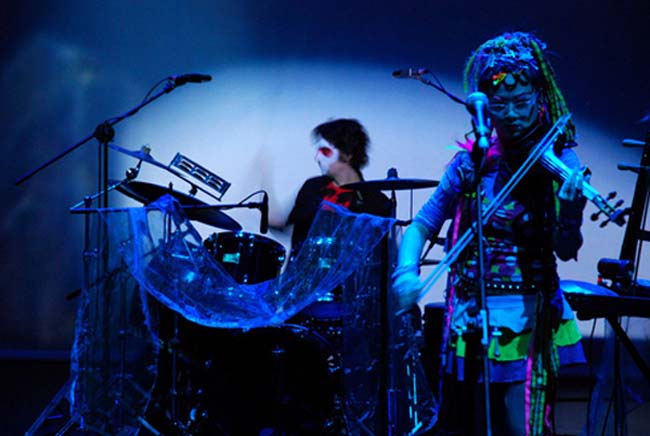 Fusing the worlds of electro-acoustic music, film-making and story-telling, CHi2 (Liz & Sarah Liew)’s exciting multi-media production is based on the classic Chinese tale of Monkey King.

‘Double – violin assault specialists’ CHi2 provide a brand new spin on the classic Chinese tale of Monkey King. Celebrating the richness and colour of Beijing Opera and re – interpreted for the modern day, CHi2 have created an edgy musical cocktail of traditional and modern sounds, fusing together acoustic and electric instruments, digital media and one of the world’s most ancient art forms with a unique contemporary twist, to create a stunning show that bursts with colour and vibrancy.

The story is based on the sixteenth century classic Chinese folk epic novel, Monkey: Journey To The West, to which CHi2 have composed an original soundtrack, complemented by the filmic interpretation of the storyline by filmmakers Michele Rosaus and Steve Teers, whilst award – winning composer Tom E Morrison has produced the score. The drama both aurally and visually, is enhanced by the interaction of actor/narrator Tom Wu as he employs spoken word, narration and his expertise in kung fu to convey the thrill – seeking adventures of the storyline.

Chi2 are a duo of British-Chinese violinists who play a fusion of classical and electronic music influenced by their Singapore Chinese heritage. They have performed and toured with many pop artists including Moby, Anastacia, Lamb., Goldfrapp, Uriah Heep, Sixpence None The Richer, Boy George, Nelly Furtado, KLF and The Orb.