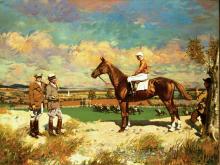 The artwork will be exhibited in the Keeneland Sales Pavilion beginning with the September Yearling Sale, which opens Sept. 12, and continuing through the November auction date. Sporting Art Auction representatives will be on hand in the Pavilion’s Limestone Café to provide catalogues and further information to interested parties. A digital version of the catalogue also is available online via thesportingartauction.com.

“The collaboration between Keeneland and Cross Gate Gallery is a natural fit and one that makes this auction so unique,” Keeneland President and CEO Bill Thomason said. “Many of our clients and guests are avid sporting art collectors, and they enjoy browsing the artwork during the September and November sales and fall race meet.”

One of the most significant pieces catalogued for 2016 is Irish painter Sir William Orpen’s Sergeant Murphy and Things, a 29½” x 40” oil on canvas depicting the winner of the 1923 Grand National. Orpen is widely considered to be one of the best portrait painters of the 20th century.

Another celebrated work is Andy Warhol’s Willie Shoemaker, a 40” x 40” unique silkscreen portrait of the Hall of Fame jockey. Warhol, who immortalized many iconic figures in pop culture, in 1977 began working on a series of portraits of athletes at the behest of Richard Wiseman, a well-known art collector and sports enthusiast. Willie Shoemaker is the first portrait Warhol produced in that series.

“In just a few short years, the Sporting Art Auction has matured into one of the genre’s most anticipated annual events,” Cross Gate Gallery owner Greg Ladd said. “We travel throughout the U.S. and Europe to acquire these special pieces and really look forward to making them available to collectors.”

Among other notable artwork to be offered this year are: Morris Park Handicap, 1900, a 25” x 40” oil on canvas by noted American artist Henry Stull, which captures the stunning upset by Maid of Harlem over champion Ethelbert; a 14” x 17” bronze by Pierre-Jules Mêne from his Vainqueur du Derby series; and Morning at Keeneland, a 36” x 36” oil on panel by award-winning Vietnamese-American artist Quang Ho.

In keeping with Keeneland’s mission, the association’s portion of the auction proceeds will benefit its non-profit initiatives, including the Keeneland Library Foundation.

Inquiries are welcome via email to info@thesportingartauction.com or by calling Cross Gate Gallery at (859) 233-3856.

Founded in 1974 by owner Greg Ladd, Cross Gate Gallery is a leading source of the world’s finest sporting art. Cross Gate specializes in equine-related art, and its impressive collection ranges from 19th and early 20th century classic works to contemporary paintings and sculpture.  Its Central Kentucky location makes the focus on sporting art a natural one. Cross Gate is also recognized as a leading gallery in contemporary British figurative painting.