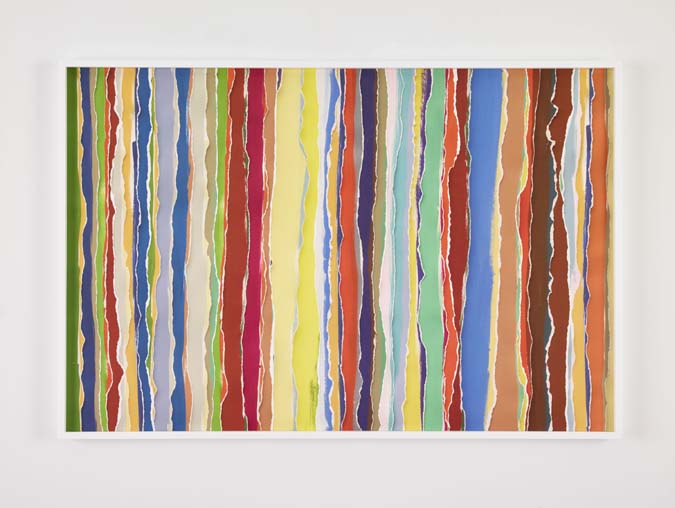 Sikkema Jenkins & Co. is pleased to present Epistemes, a solo show of new work by Vik Muniz. The exhibition – which premieres the artist’s new series Handmade in the United States – will be on view at the gallery from February 23 through April 1, 2017.Best known for his re-creations of iconic images from visual culture made using nontraditional materials and recorded with a camera, Muniz here strips the work of representational imagery, in a direct exploration of the illusionist strategies and material processes that he has developed over the course of his career. As Muniz explains, “It’s like a menu of the ideas that I’ve drawn on, a compendium of strategies exposed in a very simple way.”

These new works combine the material object and photographic trompe l’oeil into a unified abstract composition. Commenting on the confounding image-object relationship probed within these works, Muniz observes, “It always goes both ways. What you expect to be a photo isn’t, and what you expect to be an object is a photographic image.” Extending this idea more broadly, Muniz adds, “In a time when everything’s reproducible, the difference between the artwork and its image is all but nonexistent.”

The exhibition’s title is taken from the philosophical term épistème, which Michel Foucault introduced in his book The Order of Things and refers to the implicit structures that set the conditions for the production of scientific knowledge in a given time and place.

Vik Muniz was born in 1961, in São Paulo, Brazil and he currently lives and works in New York and Rio de Janeiro. His work has been exhibited in prestigious institutions worldwide with recent solo exhibitions at the Eskenazi Museum of Art at Indiana University, Bloomington, Indiana; High Museum of Art, Atlanta; and Mauritshuis, The Hague, Netherlands (all 2016). His work is included in the collections of major international museums such as: Art Institute of Chicago, Chicago; Los Angeles Museum of Contemporary Art, Los Angeles; The J. Paul Getty Museum, Los Angeles; the Metropolitan Museum of Art, New York; Museum of Modern Art, New York; Museu de Arte Moderna de São Paulo, São Paulo; and the Victoria and Albert Museum, London; among many others.

Muniz is involved in social projects that use art-making as a force for change. In 2010 his work with a group of catadores – pickers of recyclable materials – was the subject of the Academy Award nominated documentary film Waste Land. In recognition of his contributions to education and social development including his work with the catadores, he was named a UNESCO Goodwill Ambassador in 2011. More recently, he opened Escola Vidigal, offering preschool and afterschool programs in art, design and technology to children 4 to 8 years old at the favela Vidigal in Rio de Janeiro.