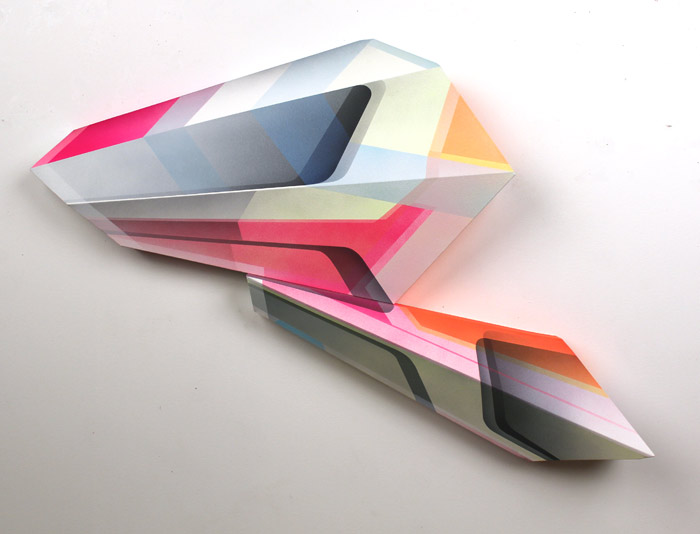 Contemporary design compresses the problems of quantum physics into domestic space.  In Lightspeed, a show opened September 7th at the Ruth Bachofner Gallery in Santa Monica, California, Oregon artist Trygve Faste explores the kinetic architecture of such transformations. His work experiments with the way lines organize space dimensionally, how angles catch and refract light, and the way color is dispersed across conjoining planes. Faste suggests that within the context of consumer culture, image and form combine to seduce and manipulate perception, pushing culture past the limits of terminal velocity.

Faste refers to the pieces in the show as “protoforms,” a term which relates both to the experimental nature of making prototypes and also to the idea that while the shaped canvases on which he works have more dimension than a typical painting, they exist in the realm of planar-image and illusion, never actually achieving the fully-dimensional existence of free-standing sculpture. The fact that they appear to be about to do so is the source of their kinetic appeal. While Faste’s protoforms reference the tradition of “picture-as-object” pioneered by Frank Stella, the figures move beyond static representation into the realm of what is known commercially as kinetic styling—capturing the implied velocity of an object-in-motion and delivering the impression of energy caught in the act of conversion into material form.

Faste’s work has its genesis in image research; his work references contemporary trends in industrial and product design. Through careful study of contemporary culture, the artist has gathered a lexicon of repeated shapes and patterns related to the architectural, technological, and psychological trends his work explores. Faste’s multi-planar canvases are bent into three-dimensional representations of these forms, then gessoed and smoothed so that all canvas seams are concealed. Next, some sections of the canvas are masked, while others are air brushed with slick acrylic hues and shades, creating an illusion of depth reiterated by the play of color across conjoined planes. 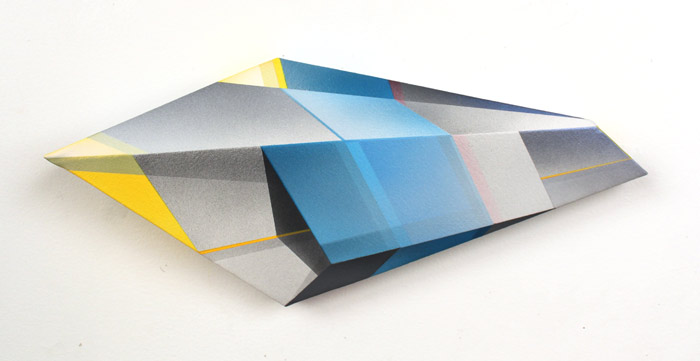 When finished, each of the pieces is given a title that references the specific colors that comprise its surface gloss.  One of the most interesting aspects of the figures is the implied prism outside the frame. The figures explore the ways lines emerging from specific but unrepresented points of origin in dimensionally organized space, and the way the angles these lines create catch and refract light. The relationship between color and form in each piece is both kinetic and dynamic. The effect Faste achieves is that of observing light in the process of being bent, as if he were able to capture the moment immediately preceding the transformation of light energy into perceivable matter.

Stills of Faste’s creative process can be viewed at trygvefaste.com.  They reveal that while it is easy to interpret Faste’s work as “futuristic,” to do so may be naive.  While his process is technologically sophisticated, the media the artist incorporates in his finished figures (wood, canvas, paint,) are relatively primitive. Seen from this angle, Lightspeed is a visual reiteration of the first (ancient) law of the conservation of energy.  Faste’s work suggests that everything we consume originates as particle and wave. It suggests that matter is merely energy manipulated, through the process of design, into material forms intended first to stimulate, and then to satisfy desire.