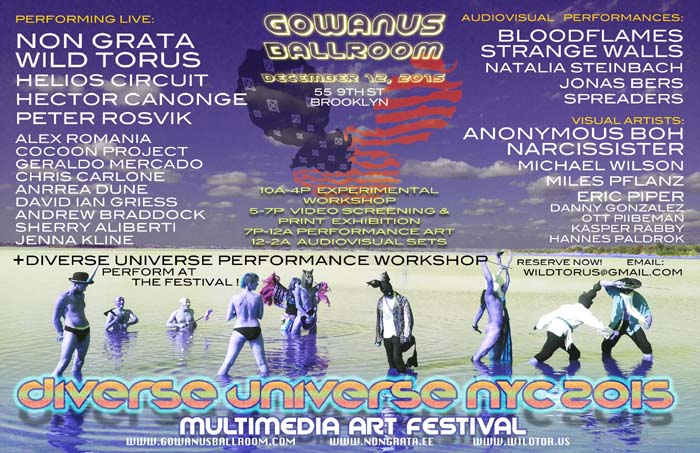 On Saturday December 12th, NON GRATA and WILD TORUS present DIVERSE UNIVERSE NYC 2015 MULTIMEDIA ART FESTIVAL, at GOWANUS BALLROOM. This is a full-day event that includes over 30 participating local and international artists. The events include live interactive performance and sound art presentations; an art exhibition and video screening, experimental workshops; and immersive audiovisual installations. Diverse Universe is an ongoing performance art festival led by NON GRATA (Estonia), which has been touring the world non-stop since 2005. This event is the last stop on this year’s Diverse Universe worldwide festival, which has been touring the United States and Mexico since October, along with WILD TORUS (NYC), HELIOS CIRCUIT (Oklahoma), PETER ROSVIK (Finland), and MARITA SOLBERG (Norway). The event will also feature a plethora of avant-garde visual, performance, and sound artists who work in and around NYC, featuring HECTOR CANONGE, ALEX ROMANIA, NARCISSISTER, BLOOD FLAMES, SPREADERS, THE STRANGE WALLS and many more. A performance art workshop led by Non Grata will be held earlier in the day, between 10a and 4p, and is open for registration now for $50. Please contact wildtorus@gmail.com to sign up. Workshop participants will present their performance as part of the main event. A visual exhibition opening and lecture will be held between 5 and 7p. Live performance art will begin at 7p, followed by an audiovisual segment that ends at 2a. Original prints and wearable art will be available for purchase throughout the night. Diverse Universe NYC 2015 will take place at Gowanus Ballroom, Brooklyn’s behemoth contemporary art space on the scenic Gowanus Canal.

Pre-sale discounted tickets are available on Eventbrite; RSVP on Facebook. $10 at door from 7p-on. Entry and drink donations go directly to the DIVERSE UNIVERSE festival as well as local artists. Special thanks to the directors of Gowanus Ballroom, George Sferra and Josh Young.

About the performance art segment, 7p – 12a:

NON GRATA (http://www.nongrata.ee) is an Estonian collective who, with smoke, fire, blowtorches, and red-hot cattle brands, has firmly established itself as one of the most audacious and evolving performance art groups to regularly perform in the United States. Taking its name from the phrase persona non grata, meaning “an unwelcome person,” the group first started as an alternative art academy, called Academia Non Grata. Now, they travel the world practicing performance art with a revolving set of members that, over the years, has totaled up to 900 different individuals. Current members include leaders ANONYMOUS BOH and DEVILGIRL, as well as NEWBORN, TRIPPY, HOBO, DRUNKARD, MARINEFUCK, COWBOYX, BURNING SANDERS, and NORWEGIAN AIR.

PETER ROSVIK (http://contemporaryperformance.org/profile/PeterRosvik) A.K.A. DRUNKARD is a noise musician and performance artist from Finland who uses a variety of media forms, including fine art, video, sound, and installations. Since 2007, Rosvik has been focusing on performance art, exploring what he calls “the often specious distinctions between the artificial and the natural of being human.” Rosvik is fascinated by concepts that underpin cultural construction, such as belonging, marginalization, dialogue and other forms of socio-cultural phenomena.

HELIOS CIRCUIT (https://www.facebook.com/helioscircuit/ ) is a performance and visual art collective from Oklahoma that engages in risky actions to challenge authoritarian systems of society. It is represented by ERIC PIPER (BURNING SANDERS) founder of Norman, OK’s Dope Chapel; DANNY GONZALEZ (MARINEFUCK), originally from Puerto Rico; and MICHAEL WILSON (COWBOYX), originally from Arizona. All three artists practice both performance art and printmaking. Working either as a collective or individually, these artists conjure surreal narratives that draw from their homeland of the American South and reach universal levels.

MARITA ISOBEL SOLBERG A.K.A. NORWEGIAN AIR (http://maritaisobelsolberg.virb.com/) is a musician and visual artist from Norway who practices music, performance art and installation. Solberg is a multifaced crossover artist that experiments and engages many different media in her work such as sound/music, performance, photography, poetry, spoken words, video, clay/ceramics and sculpture. Interweaving elements from Sámi, Northern and Japanese Culture and subculture she embodies personas or characters of varied but particular properties; The seer, the witch, the sage or the jester.

HECTOR CANONGE (www.hectorcanonge.net ) Canonge is an interdisciplinary artist whose work incorporates the use of new media technologies, physical environments, and cinematic and performance art narratives. In his work he explores and treats issues related to the construction of identity, gender roles, and the politics of migration. His performances mediate movement, endurance and ritualistic processes as well as interaction with the public.

GERALDO MERCADO (http://geraldomercado.com ) Mercado is a Brooklyn-based artist of Puerto Rican descent. Through performance art, Mercado seeks to transform his body into an empathetic zone, to become a catalyst for self-reflection. He creates performative works that are confrontational, funny, aggressive, and high energy.

Born in NYC, The Cocoon Project is a multi-disciplinary, nomadic collaboration that performs and documents hand-crafted, fabric Cocoons with various movers, live projected visuals, and soundscapes. Aliberti, originally from Pennsylvania, is The Cocoon Project founder as well as a magical performance artist who shares personal stories. Phelps is a Brooklyn-based filmmaker and projection artist who makes cerebral visuals. Paul is a Brooklyn-based musician who specializes in mixing found sounds with ones he creates.

ANRREA DUNE (www.anrreadune.wordpress.com ) Dune is a performance artist and mystic shaman who works in the NYC area. She creates spiritual environments based from her Ecuadorian heritage and extreme yoga practice.

DAVID IAN GRIESS (http://davidiangriess.tumblr.com/video ) and ANDREW BRADDOCK (https://vimeo.com/andrewbraddock) Braddock is a sound artist and Griess is a performance and video artist. Both are American artists who work in NYC. Griess’ work questions individual autonomy within capitalist, Darwinian society.

OUJI (http://www.ouija-nyc.com/ ) is a member of Non Grata who is based in Brooklyn. Ouija is an impure thought, a curiosity, and an exploration through the primal darkness of the recessed mind that makes the skin itch and the brain tingle. Through performative actions, installation and illustration, Ouija meanders within the delicacy of virginity and the thrill of sin using the human emotion as a tool to open up new understandings to questions we never wanted to ask.

AMBER T LEE (https://www.facebook.com/ambertonellelee/) is a member of Non Grata who is based in Brooklyn, originally from Virginia. She is a performance artist with a background in theatre. In her work, she aims to challenge the limits of the audience with invented games and exposing her feminine sex. She is guided by a quote from Albert Camus who said “Live to the point of tears”.

SPREADERS (www.spreaders.bandcamp.com ) Based in Hudson Valley, NY, Spreaders is a performance artist and noise musician who experiments with synthesizers and tape cassettes, in addition to playing the drums and guitar. In 2013 he got mono and everything has been different ever since.

Steinbach is a violinist, vocalist, and composer based in NYC. Her musical writing is greatly influenced by classical music as well as a variety of other genres including experimental, metal, avant-garde, and alternative rock. Cohen has performed nationwide at venues ranging from Radio City Music Hall, the Blue Note, and Lincoln Center, to Irving Plaza and the Obscene Extreme Metalfest. He is also a founding member of Relapse Records artist, and one of NYC’s premier death metal bands, Pyrrhon, and a core member of Crucial Blast Records artists Epistasis, and Code 666 artists Imperial Triumphant.

THE STRANGE WALLS (http://www.thestrangewalls.com/) This NYC-based music project is for fans of Tear Garden, the legendary Pink Dots, and anyone seeking a mellow and obscure soundscape experience. It is intriguing with a raw, punkish attitude and melancholy, stripped-down, electronic devices.

BLOOD FLAMES (https://www.facebook.com/BloodFlames-1618250391754076/) Blood Flames is the NYC-based, multi-dimensional ethos of sound’s more subtle aspects. They are a group of synthesizer musicians, electric guitarists, vocal artists, and a Theremin player.

JACOB COHEN (http://subwaycello.tumblr.com/ ) Cohen is an NYC-based cellist on the come up. He can be found in the subway tunnels and gutters, conjuring the devil and sending his broke ass to outer space. Jacob in currently developing an art program for incarcerated youth at Rikers Island.

NARCISSISTER (www.narcissister.com/) is a video, performance, and fine artist who works in NYC. Always disguised in a mannequin mask, Narcissister makes videos with her own self that present transgressive narratives of female identity. Narcissister questions fetishism, particularly sexual fetishism, which is notorious in its fixing of racist and gendering stereotypes.  Rather than abandon this contaminated site, Narcissister dives headlong into the muck, into the depths of the fantasy and fetish itself, to expose and deconstruct their power.

KATIE CERCONE (http://katiecercone.com/) is a video, performance, and fine artist who works in NYC, originally from California. Through the phantasmagoric ‘veil’ of her own distorted magnitude, Cercone has developed a derelict cosmogony of the spiritualism of hip hop via the embodied freedom encompassed in its interdynamic gestures of power, symbolism, triple metaphor, dance and song as metalanguage. She is the co-director of Go! Push Pops.

ELISA GARCIA DE LA HUERTA (http://www.elisaghs.com/ ) is a video, performance, and fine artist who works in NYC, originally from Chile. Her work confronts patriarchy, capitalism and post colonialism, embodying a new hierarchy of emotional values grounded in the wisdom of indigenous folklore, goddess and queer worship, women’s crafts and feminism. Garcia is the co-director of Go! Push Pops.

MILES PFLANZ  (https://vimeo.com/milespflanz) is a video artist who works in NYC. His busy aesthetic relies heavily on a documentary-style process, in combination with glitch art and found media footage.

*A performance art workshop led by Non Grata will be held earlier in the day, between 10a and 4p, and is open for registration now! $50 Please contact wildtorus@gmail.com to sign up. Workshop participants will present their performance as part of the main event.