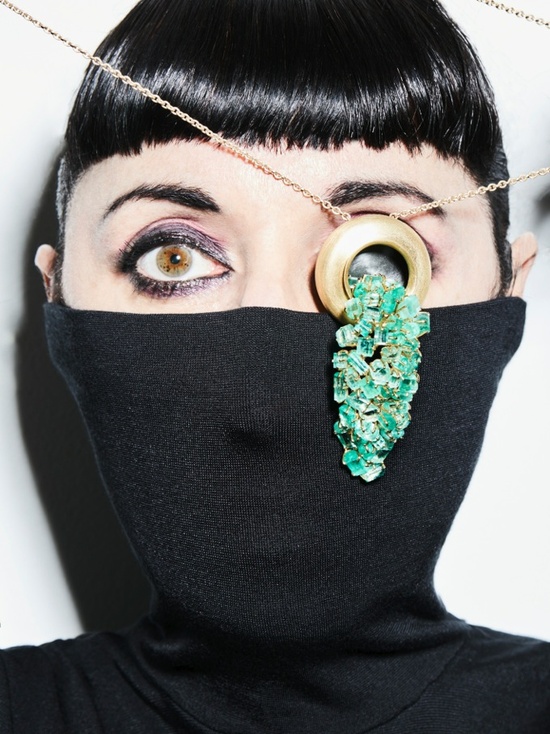 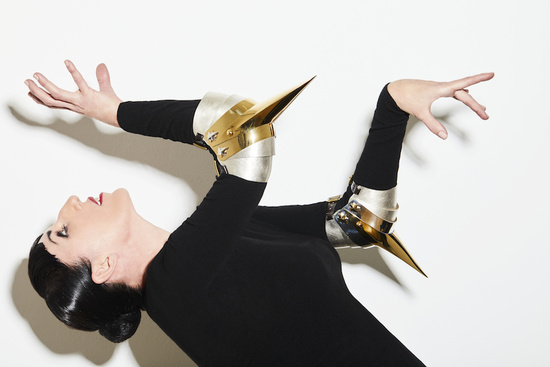 Prior to the era of Modernism, boundaries remained firmly fixed between painting and sculpture, classified as ‘fine art’, and jewelry, which belonged strictly to the province of applied arts. By the turn of the 20th century, these boundaries began to blur. Such artists as Lucio Fontana, Georges Braque, and Pablo Picasso brought broader respect to jewelry as an art form via their experiments with wearable objects, while Surrealists Salvador Dali, Max Ernst, and Man Ray explored jewelry as a form of expression and self-assertion. American artist Alexander Calder was the first to make jewelry part of his ongoing practice, constructing wearable pieces that fit smoothly into his wider oeuvre. Forming jewelry as one-of-a-kind works developed by hand, the artist made these pieces not only as loving gifts but to advance his exploration of formal sculptural issues. He fashioned wearable objects with the dynamism of the human body in mind – small sculptures that were set in motion or defined in space by the geometries of the wearer’s body – and thus established a new threshold for the pursuit of jewelry as fine art. Over the course of his career, Calder created nearly 2,000 pieces of jewelry and inspired subsequent generations of artists to actively experiment with wearable sculpture.

The Portable Art Project expands upon this history in the present with new works by 15 artists, using Louise Bourgeois’ uncanny cuffs as its starting point. Bourgeois’ bracelets are swirling coils of rose gold, yellow gold, and rhodium-plated silver. Intimate counterpoints to the artist’s familiar large-scale sculptures of coiled aluminum, often seen suspended and in seeming motion, these cuffs bond the wearer with Bourgeois through an intense and active embrace.

The personal connection between artist and wearer is more explicit in Caro Niederer’s ‘Charm Bracelets’ (2009). Each consists of 7 charms that are in fact small framed photographs delicately imprinted on glass. Whereas traditional charm bracelets are beloved as three-dimensional records of a wearer’s own life, with each charm marking a biographical milestone, Niederer’s charms implicate the wearer in her life by depicting scenes of her home, studio, and travels.

Alluding to the sense of play often associated with personal adornment, Pipilotti Rist’s large-scale, gestural lucent polycarbonate and computer wire squiggle necklaces, called ‘Jewellery for Wintertimes’ (2016), offer up surges of color intended to ‘awaken the body in a timeless spring.’ Color and gesture likewise define Mary Heilmann’s seven bold disk necklaces, each a veritable breastplate of hollow silver disks lacquered in vivid hues. For Heilmann, the body is a canvas onto which beautiful pools of paint are poured, making the wearer ‘visible from across the room.’ Phyllida Barlow’s grand electroformed and enameled knots also emphasize color, suggesting futuristic bows of recycled fabric that evoke the urban clamor and wit of her acclaimed large-scale sculptures.

Whereas Rist, Heilmann, and Barlow offer up richly colored sculptural works that celebrate the properties of their inorganic materials, Michele Oka Doner’s pieces take on the monochrome atmosphere of an inky night punctuated only by stars. Her ‘Plankton’ bracelet (2016) and ‘Nekton’ neckpiece (2016), are comprised of diamond-encrusted, darkly patinated bronze that has been carefully twisted and tangled to resemble aquatic organisms that might cling to a wearer after a night swim. The artist often manipulates the metal of her finished wearable sculptures to fit a specific anatomy, merging work and wearer.

Paul McCarthy’s slyly elegant silver, yellow gold, and rose gold butt plug pendants offer a winking commentary on our desire for expensive playthings in a world where minimalist sculptures may become culturally indistinguishable from sex toys. Similarly, New York artist Nate Lowman merges high and low in pendants of steel with brown and champagne diamonds, shaped like the cruciform lifting mechanisms of tow trucks. Both works of collaged detritus and tributes to history’s treasured relics, his pieces riff on the contemporary relevance of one of the oldest forms of unisex jewelry known: the crucifix. Pendants are also the chosen form of Subodh Gupta, whose contributions to the Portable Art Project echo the large-scale studio sculptures of India’s everyday kitchen implements that are signatures of the artist’s oeuvre. Gupta’s gold necklaces are the mouths of humble jars and urns from which sparkling emeralds and diamonds tumble. 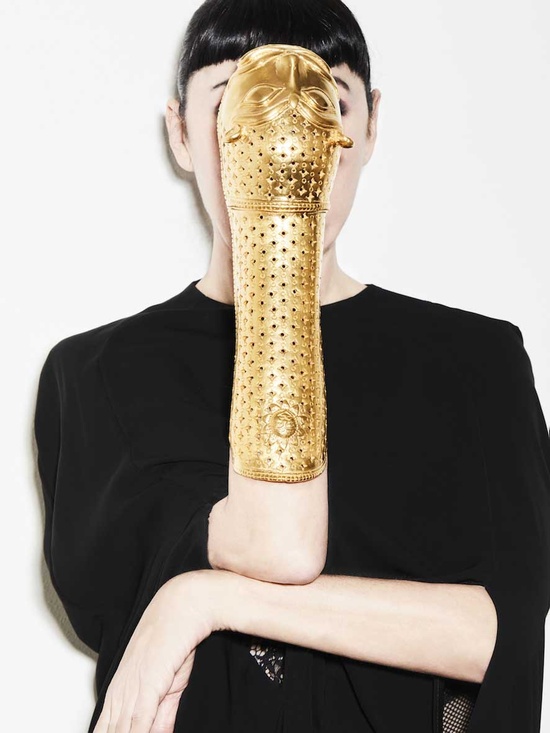 Bharti Kher’s lion-headed ‘Warrior Bracelet’ (2016) is intended to both physically and emotionally transform the wearer. It is jewelry as talisman and protector; and by virtue of requiring the wearer to hold it in place via a concealed handle, it harkens to elements of performance. Kher has described this highly adorned gold-plated work as an empowering accessory, ‘a skin the shaman carries… Wear it to work and keep it in your bedroom for when you need to call into being your warrior.’ 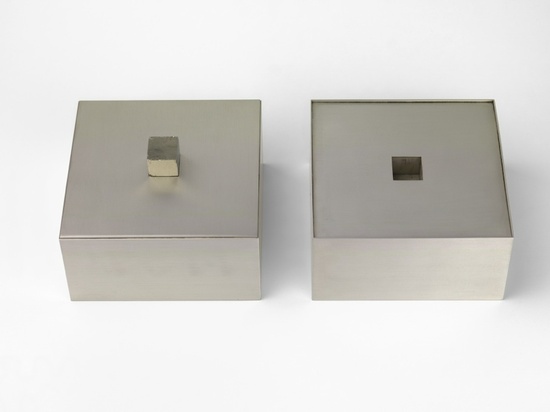 Whereas many works in the Portable Art Project are conceived to be noticed, several participating artists have responded with rings that are the initiative’s smallest and most discreet objects. The title of Stefan Brüggemann’s ‘Fool’s Gold’ (2016) alludes to the material used to create his pyrite ring, which is housed in a simple futuristic cube of the same medium. The surface of the pyrite, a mined mineral, is mottled with natural imperfections that give Brüggeman’s pieces subtle variation. Andy Hope 1930’s classical gold rings are deliberately stripped of details and, consequently, rendered timeless and universal. 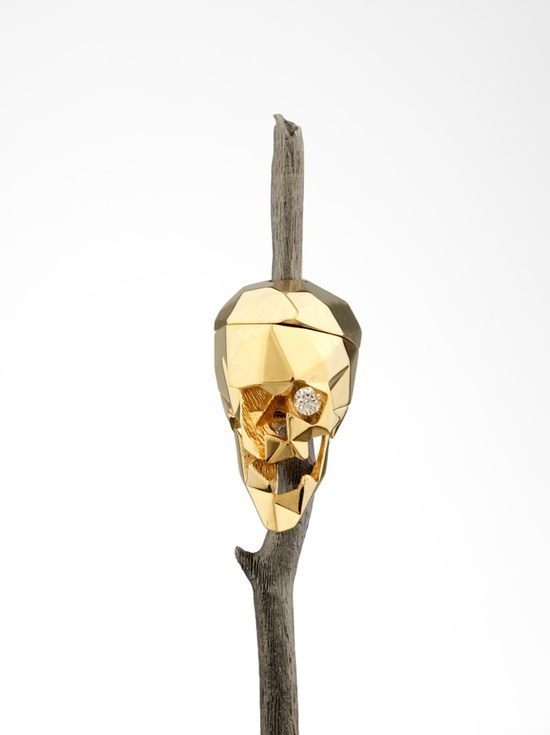 By contrast, Matthew Day Jackson’s contributions stand apart for being compositional elements of larger sculptures. Mining the memento mori theme that has coursed through the intertwining histories of art and jewelry for centuries, Day Jackson has made two pieces centered around the skull as icon and adornment. The first is an electroformed, blackened silver skeleton wall sculpture that includes a removable ring. The gold skull piece consists of a wooden branch that rises 18’ from a stump carved with a beautiful forest scene. The top of the rod is encircled by a collage of gold forms fitted together, including an expressionistic skull ring with gleaming diamond eyes. In these works, Day Jackson posits the sculpture as a body in itself, with a work of jewelry adorning and serving as a clue to his intended meaning.

Documentation
The exhibition also includes a commissioned series of performative photographs of celebrated Spanish actress Rossy de Palma, best known for her starring roles in the films of Pedro Almodóvar. Shot by Gorka Postigo, these images capture de Palma engaging with each work as an extension of her body and a tool for expressing identity: a talismanic conductor of physical sensation and emotion. As artist Subodh Gupta has observed, ‘When someone is wearing an artwork, his or her own body and persona become the context for the work, so it can entirely change the meaning of a work. In some senses, a certain amount of control that one may have had over an artwork, as the artist, is lost; you have to hand that over to the person wearing the work.’

The Portable Art Project exhibition will be documented in a fully illustrated catalogue.