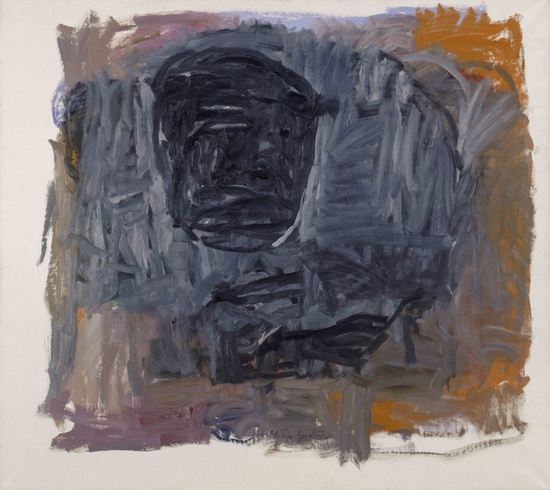 EXPLORING A PIVOTAL DECADE IN THE CAREER OF AN AMERICAN TITAN, PHILIP GUSTON: PAINTER, 1957-1967
WILL GO ON VIEW IN NEW YORK

‘I think a painter has two choices: he paints the world or himself. And I think the best painting that’s done here is when he paints himself, and by himself I mean himself in this environment, in this total situation.’
– Philip Guston, 1960

New York… Beginning 26 April 2016, Hauser & Wirth will present ‘Philip Guston: Painter, 1957 – 1967’, exploring a pivotal decade in the career of the preeminent 20th century American artist. Featuring 36 paintings and 53 drawings, many on loan from major museums and private collections, the exhibition draws together a compelling body of work that reveals the artist grappling to reconcile gestural and field painting, figuration and abstraction. Calling attention to a series of works that have not yet been fully appreciated for their true significance in the artist’s development, ‘Philip Guston: Painter, 1957 – 1967’ explores a decade in which Guston confronted aesthetic concerns of the New York School, questioning modes of image making and what it means to paint abstractly. In the number and quality of paintings on view from this period, the show parallels Guston’s important 1966 survey at the Jewish Museum in New York, a half century ago. As its title suggests, the exhibition offers an intimate look at Guston’s unique relationship to painting and the process by which his work evolved.

On view through 29 July 2016, ‘Philip Guston: Painter, 1957 – 1967’ has been organized by Paul Schimmel, Partner and Vice President of Hauser & Wirth. The exhibition is accompanied by a comprehensive, fully illustrated catalogue focusing specifically on the period beginning in the late 1950s and spanning a decade until the artist’s return to figuration in the late 1960s.

By the mid-1950s, Philip Guston (1913 – 1980) and his contemporaries Jackson Pollock, Franz Kline, Willem de Kooning, Mark Rothko, Barnett Newman, and Clyfford Still, were among the leading figures of the New York School, standing at the forefront of American avant-garde painting. Guston, whose work was widely exhibited during this period, achieved critical success as an abstract painter, whose work was lauded its luminous, ethereal, and tactile fields of bold gesture and color. At this pinnacle moment, with the artist seemingly at the height of his career, an unexpected shift occurred in Guston’s approach. Dark, ominous forms began to crowd his paintings, coalescing into what would become a new language that consumed his practice over the next ten years. 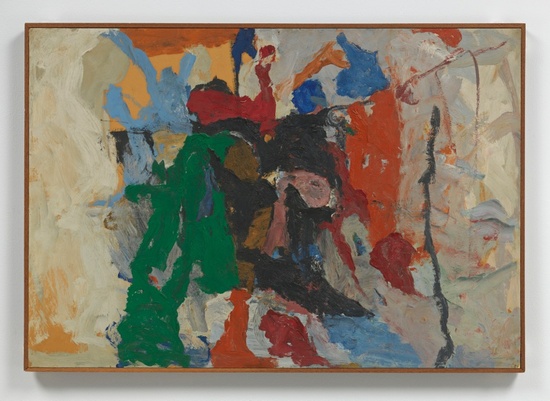 The exhibition at Hauser & Wirth opens with ‘Fable II’ and ‘Rite’, two small paintings from 1957 that suggest evolution in both Guston’s mood and technique. Disturbing the pictorial field of these canvases, thick, densely clustered black strokes burst through heavily pigmented colorful patches ranging in tone from radiant azure and blazing orange, to fleshy pink and deep forest green. Similarly, a silvery wash of glimmering brushstrokes begins to encroach upon Guston’s lighter forms. Enveloping the background completely in ‘Last Piece’ (1958), the expanses of grey field suggest erasure – an obliteration of the artist’s previous association to pure abstraction.

In that same year of 1958, Guston exclaimed, ‘I do not see why the loss of faith in the known image and symbol in our time should be celebrated as a freedom. It is a loss from which we suffer, and this pathos motivates modern painting and poetry at its heart’. In the face of abstraction, Guston’s search for corporeality intensified. He challenged himself to create and simultaneously dissolve the dialogues of the New York School in a field that evoked ‘something living’ on the surface of his canvas. The introduction of brooding forms can now be understood as harbingers of a new figuration, wherein titles such as ‘Painter’ (1959) go so far as to suggest the pictorial presence of Guston, the painter himself. Wrestling with the simultaneous existence of abstraction and representation, ‘Painter’ strikes a precarious note: ambiguous, but semi-recognizable forms recall the artist’s early figurative works of the 1940s. A red shape and the loose application of blue paint hint at the return of his signature hooded figure, here with a paintbrush in hand. At the same time, however, the artist’s gestures dissolve legible shapes into a swirling field of energies in flux. 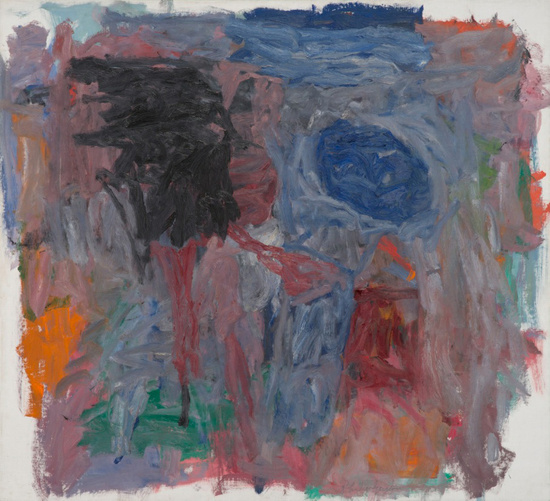 The exhibition continues across four dedicated rooms, tracing the evolution of Guston’s forms through the 1960s until they are reduced to “the isolation of the single image”. With such works as ‘Path II’ (1960) and ‘Alchemist’ (1960), dense pictorial dramas are unleashed, with colors and forms competing against one another in a storm of darkened strokes. In ‘Path IV’ (1961), Guston’s blackened, weighted masses emerge victorious, swarming in an atmosphere of rusted reds and ashen greys. Meanwhile, ‘Accord I’ (1962) reconciles the grouping of Guston’s black forms while still offering richness and warmth, as faint hues of color peek through pewter grey grounds. 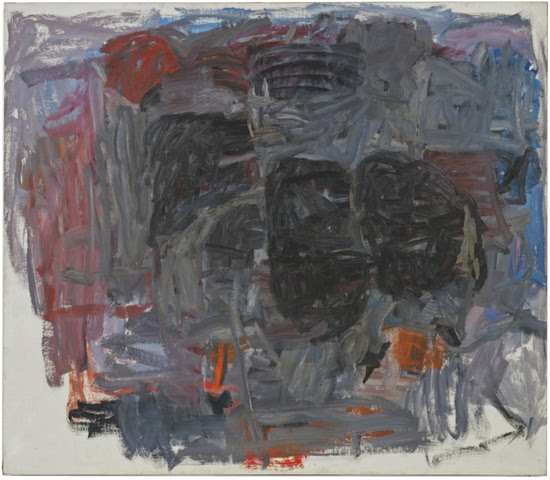 Such concessions disappear in the following year: In a significant group of works created between 1963 and 1965, Guston interacts directly with the raw surface of his canvas, marking gestural, smoky fields in greys and pinks. One of the largest paintings from this period, ‘The Year’ (1964) is dominated by the presence of two great black personages floating in a field of luscious wet-on-wet strokes. Using white pigment to erase his looming black strokes, Guston creates heaving washes of nuanced grey matter that seem to pulsate with energy and life. As forms become fewer and denser in other works, the artist’s titles imply vague narratives. In ‘Group II’ (1964) or ‘The Three’ (1964), head-like shapes and bodies emerge. In the latter, Guston represents a family: the artist, his daughter, and his wife. The culmination of this extraordinary series is ‘Position I’ (1965), in which a single black shape nestles in a barren landscape devoid of chromatic variation. 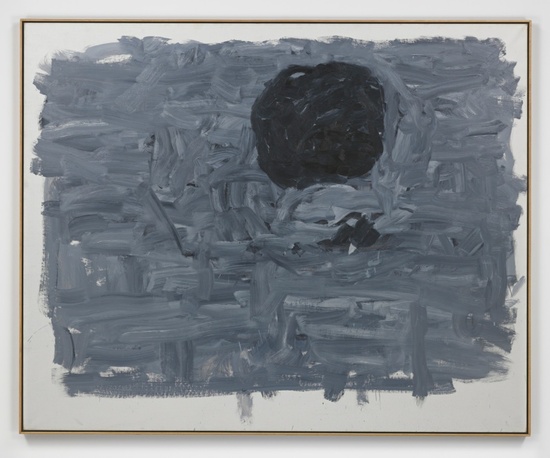 In the years following his 1966 Jewish Museum survey, Guston would abandon painting and turn to drawing during a time of internal conflict and personal turmoil. In the two-year span between 1966 and 1967, he produced hundreds of works on paper in charcoal and brush-and-ink that are known as his ‘pure’ drawings. Works from this period occupy the final room of the exhibition at Hauser & Wirth. Presented together in a grid, they recall the manner in which Guston lived with these works, which were tacked to his studio walls.

Commenting upon the decade explored in ‘Philip Guston: Painter, 1957 – 1967’ Paul Schimmel said, ‘If there was one way in which Guston was consistent as an artist, it was in his unwillingness to be pinned down or to rest on his own considerable accomplishments and influence. As one of the most significant proponents in the reconciliation of gestural and field painting, figuration and abstraction, he was a solitary figure, ‘moving vertically’, unencumbered by the responsibilities and pressures that others often felt as they worked in his shadow’.