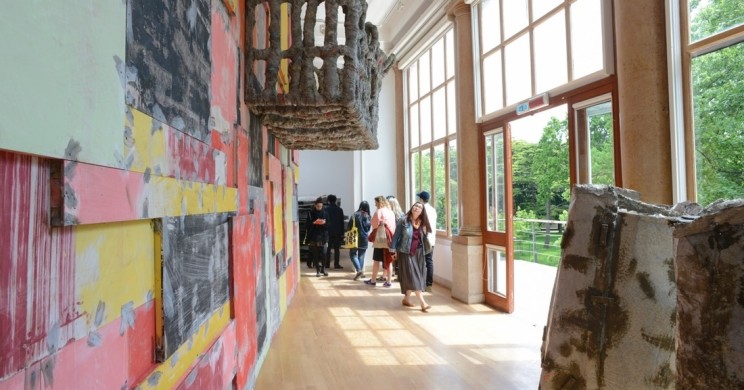 The British Pavillion on May 10, 2017 the first preview day of the Venice Biennale in Venice, Italy. Photograph by Casey Kelbaugh

Alex Logsdail, international director of Lisson Gallery, remembers the first time his father encountered Carmen Herrera’s work. It was 2008, and the painter Tony Bechara had brought some of her canvases to London for the Pinta art fair. None of them sold, says Logsdail, but his father, Lisson Gallery founder Nicholas Logsdail, was smitten.

“We said, ‘Just leave them here,’” says Logsdail, referring to the unsold paintings. “It sort of seemed blindingly obvious that it needed to be shown, and it was filling a gap in history.”

Demand for older, female artists like Herrera, who was famously 89 when she sold her first artwork and is now a ripe 102, has risen sharply in recent years, the result of a perfect art-world storm. As institutions attempt to revise the art-historical canon, passionate dealers and curators see years of promotion come to fruition, and blue-chip galleries search for new artists to represent among those initially overlooked, prices and institutional recognition for artists such as Carol Rama, Irma Blank, Geta Brătescu, and Herrera have soared.

To be sure, many of these artists have long been known to art-world insiders. Fergus McCaffrey, founder and president of his eponymous gallery, has been collecting Rama’s work since first seeing it at an art fair in Berlin more than a decade ago. He’s since amassed well over two dozen works. Manuela Wirth, co-founder with her husband Iwan of Hauser & Wirth, has long collected Romanian artist Brătescu, although the gallery only began representing her in April. Phillips Collection director Dorothy Kosinski and her husband, the architect Thomas Krahenbuhl, have followed Blank’s work for years, watching sadly as her prices keep moving further out of their reach. Isabella Bortolozzi notes that Rama was awarded the Golden Lion at the Venice Biennale in 2003.