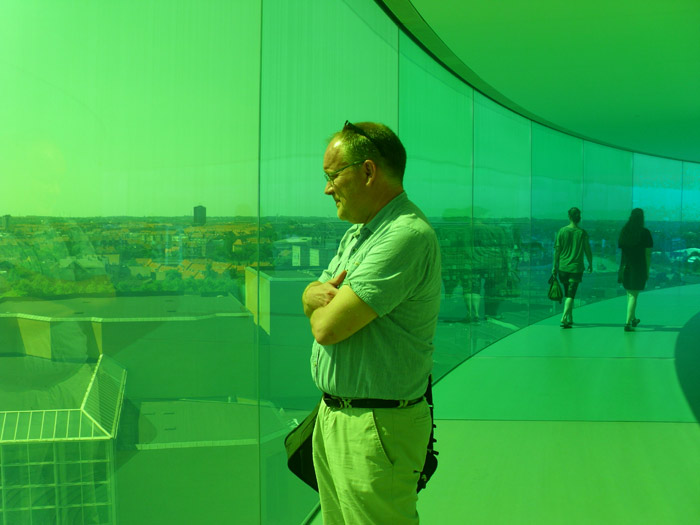 When the Danish-Icelandic artist Olafur Eliasson was invited to submit his idea in a design competition, he had no idea that proposal would change the landscape and identity of an entire city.  That is exactly what happened when Your Rainbow Panorama opened on the roof of ARoS Aarhus Art Museum.

Your Rainbow Panorama is a 250 ton artistic work made of 96 colored glass panels.  The 150 meter corridor (approximately 492 feet) is supported by 80 structural columns placed throughout the museum. “This is the future,” says  ARoS Museum Director Jens Erik Sørensen. “This is Blade Runner.” Sørensen explains, referencing Eliasson’s work to the 1982 science fiction thriller featuring Harrison Ford.

Sørensen describes Eliasson’s circle as a symbol of eternity, the celestial or divine; sitting on the square museum building, representing all things static and earthly. But, Elof Westergaard, art, culture, religion author, and priest, emphasizes that Olafur Eliasson is not trying to make a religious statement. “What Olafur does is explain science through this work in a way that we can understand it and experience it,” says Westergaard.  Regardless,Westergaard also concedes that it is nearly impossible to experience Your Rainbow Panorama without feeling a divine presence or influence.

The work is about understanding what’s around you; the ordinary, or mundane in extraordinary ways. It is your space, your perspective, and your experience defined only by what you filter through your lens.  Although a rainbow itself bears great  significance in terms of religious symbolism, Eliasson is quick to point out that his work with color is not symbolic nor is it his intention to project any esoteric meanings.

One factor in the construction of this work is that it is not controlled. Visitors are encased in the glass corridor, but the experience is not manipulated. “No two visits are ever the same,” ARoS Communications Director Bjarne Bækgaard explains.  The time of day, the weather and even the people inside the exhibit when you visit effect the individual experience.  “This is really about what you bring to the rainbow and how you perceive your surroundings,” says Bækgaard.  Visitors interact with the space by  walking at their own pace. Some stop just to take in city from a view not otherwise seen..

Your rainbow panorama also plays a significant role in the narrative of ARoS Aarhus Art Museum and the design of its architectural story.  The museum was constructed to have each floor and exhibition take part in its overall story.  “When we built this museum in 2004, it was based on Dante’s Divine Comedy,” says  Sørensen.  “That is why you start in the basement in the nine spaces, or hell if you will, and ascend the spiral to the roof top where you have this heaven type experience in the rainbow.”

The exhibit opened in 2010, but, now even Eliasson admits it has become sort of a lighthouse or compass for the city.  Aarhus residents sometimes identify where they live according to the color of the panels facing their section of the city. “Before we had this rainbow, we didn’t have a landmark,” says Aarhus artist and designer Line Dyrholm.  “Now,” says Dyrholm, “we have an icon for our city.”

More than a half million people visit the exhibit each year.  Aarhus tourism officials suggest there is a direct correlation between the opening of Your Rainbow Panorama and the growth of tourism in the city.  “If you look at the total number of visitors that we had to our 13 major attractions in Aarhus for 2011, you can see an increase of  300,000 visitors over the previous year,”  says Peer Kristensen, Visit Aarhus General Manager.  “That’s the same number that ARoS shows as the increase it had in visitors for the same year.  So, you can see people are coming to see the rainbow,” says Kristensen. And, the numbers are continually increasing,

The next step for Your Rainbow Panorama is a metal ball to be placed outside the circle with space for visitors to enter. That phase has yet to be funded but many are confident it will soon be a reality. Currently, ARoS is completing a sky lounge as phase two of this exhibition and Eliasson is creating a sun to be placed inside the sky lounge, reflecting light from multiple angles. To sum up the purpose of Your Rainbow Panorama  according to ARoS museum’s director, this exhibit is the place to come to meet with art and yourself.