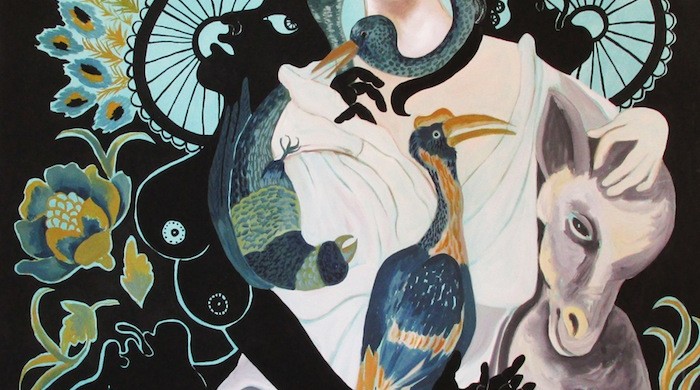 Leah Oates: How did you become an artist and did you know early on that you would be in the arts, or did you begin as something else? Where there other artists in your family?
Michele Basora: Yes, I knew I was an artist at a very young age. My uncle was a visionary artist and encouraged me since I was 7. I should say that my uncle was a huge influence on me and my work. He was very much an eccentric, he was a monk traveling the world, living on mountain tops, and he would visit me on occasion to show me his visionary paintings. He would also tell me magical stories of experiences he had during his travels. He believed very much in the spiritual world, and I always find his influence in my paintings.

My mother also encouraged me without thinking about it, having taken me to the Met and the Frick Collection when I was very young and having intellectual conversations about art at a very young age. This was unheard of having been raised in a very tough neighborhood in the Bronx.

LO: What are the themes of your work and what inspires you to make art?
MB: My paintings are based on mythology, superstition, religion, and race. It is not necessarily a theme I set about going after, but they tend to go in that direction.

LO: Who are your influences? Teachers, artists?
MB: Michael Goldberg, Lucio Pozzi, and Marilyn Minter were teachers of mine whilst going to SVA. They were the ones I felt a close connection to. In my early years I obsessed with many of the female surrealists, including Leonor Fini.

LO: Why do you think art is important for the world and why is it important for you as an individual artist?
MB: I often think about this and think about how the average person would think it that it is a very bourgeois activity. Especially being a woman and a person of color, I often think about my roll as an artist. I began my early training in art school as an abstract painter because of the push to be one and how it was looked down upon to be a figurative painter. But, I felt I had so much to say as a woman, a person of color, and one who came from a poor working class family. So, in my third year I changed and began to make paintings which, to me, had more meaning and a subtle message that sometimes incorporates the figure.

LO: What advice would you give other artists who want to exhibit in NYC etc?
MB: My advice would be to not judge a book by its cover. Generally the ones who look the least important are the ones that are actually the most important, and have a website!

LO: Please talk about upcoming bodies of work, shows etc that you have coming up.
MB: I am continuing my series of paintings from the influence of living on the upper east side and dealing with class, race, and the bourgeois culture. I will be part of a summer group exhibition, “Juicy” at Gitana Rosa Gallery, Chelsea, opening June 19, as well as artmrkt Hamptons, from July 10 – 13. I am also excited to announce a group exhibition that I am curating, “The New Bitch, Twilight of the Idols.” It will be open from September 4 – October 4 at Gitana Rosa Gallery, Chelsea.