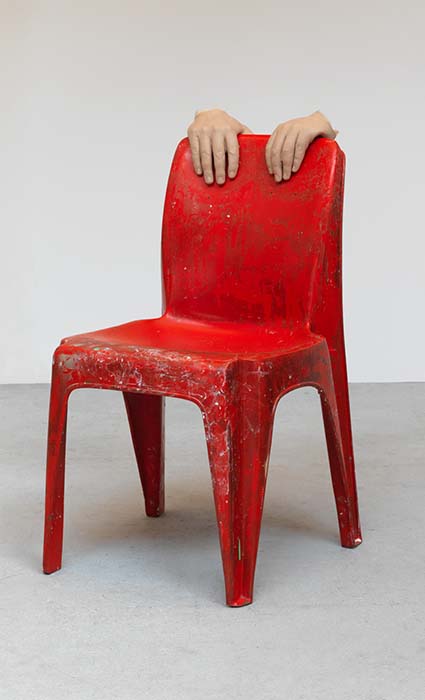 MELODRAMA is an exhibition in two acts unfolding between Luxembourg & Dayan’s London and New York gallery spaces. The show includes six sculptures, a series of photographs, and one video that together function as characters in a melodramatic play, striking dramatic attitudes, radiating pathos, and eliciting heightened emotions.

Conceived in collaboration with curator Francesco Bonami, MELODRAMA aims to examine structures of exaggerated narratives and performance in the medium of sculpture. Following the gallery’s recent survey of Alberto Giacometti’s prewar sculptures in London, and a show of César’s works in New York, MELODRAMA is the third exhibition in Luxembourg & Dayan’s season of sculptural investigations, tracing the blurry line that between materiality and imagination in the realm of sculpture.

In ACT II in New York, Vincenzo Gemito’s 19th century wax Portrait of Giuseppe Verdi will face off against Jeff Koons’ Italian Woman, a stainless steel rendering of the risqué character Lucia Mondella from Alessandro Manzoni’s 1827 novel The Betrothed. Engaged in silent dialogue, these silent busts suggest the lingering drama of an ancient tale; Verdi’s operatics and Mondella’s seduction are preserved. Another duet follows with Urs Fischer’s Untitled —a chair held by disembodied hands—playing foil to Richard Serra’s Hand Catching Lead, a film chronicling the artist’s repeated attempts to clasp pieces of lead as they plummet past him. In this pairing of two- and three-dimensional media, the uncanny, suspended stillness of Fischer’s sculpture is cut through by the gravitational momentum of Serra’s film, instigating a dialogue between the grounded and the uncertain.

In ACT I in London, similar parings include Pino Pascali’s Coda di Delfino, suggesting a dolphin that has already nearly escaped the gallery through a wall while Maurizio Cattelan’s Untitled, a taxidermy horse, follows  with a leap of its own. Fischli & Weiss’ black rubber Heart expresses the impossibility of movement, and Franco Vimercati’s photographs of a soup terrine transform a familiar domestic object into a melancholic diva.