“Marlene Dietrich: Dressed for the Image” at National Portrait Gallery 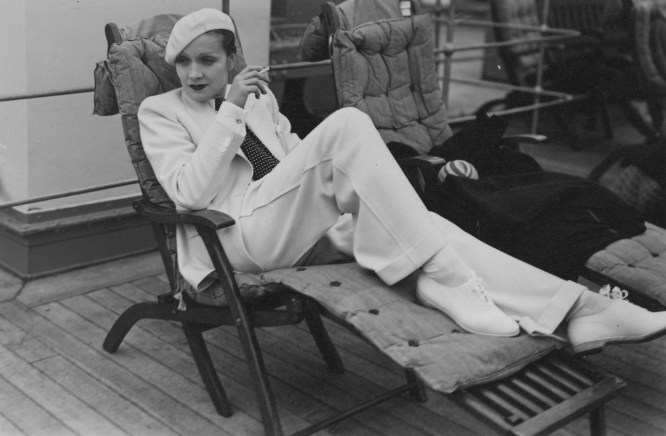 “Marlene Dietrich: Dressed for the Image,” the first major exhibition on the star in the United States, will be open at the Smithsonian’s National Portrait Gallery June 16 through April 15, 2018. The exhibition showcases the life and influence of the actress in more than 45 objects, including correspondence, film clips and photographs. Among the images are many of Dietrich at various points in her life taken by notable photographers including Irving Penn. The press preview will be held June 15 from 10 to 11:30 am.

“Dietrich is a study of contrasts in many ways,” said Kate C. Lemay, exhibition curator and National Portrait Gallery historian. “She was known for her discipline and dedication to her craft while unapologetically breaking social barriers and embracing female independence.”

Dietrich brought androgyny to the silver screen through her roles in movies such as Morocco (1930), Shanghai Express (1932) and Seven Sinners (1940). The biggest Hollywood star at a time when “talkies” were still new, Dietrich challenged strictly limited notions of femininity through her lifestyle and fashion. She once stated, “I dress for the image. Not for myself, not for the public, not for fashion, not for men.” Relying on her good looks, striking voice and witty intelligence, Dietrich achieved international fame during her long career.

Dietrich received many honors including the Medal of Freedom for her service entertaining American troops for 18 months during World War II, often near the front lines. The German-born star, who became an American citizen in 1938, remains a symbol of anti-Nazism, a fashion icon and an influential figure of the LGBTQ community.

“Marlene Dietrich: Dressed for the Image” was organized in cooperation with Deutsche Kinemathek – Marlene Dietrich Collection Berlin. This exhibition has been made possible through the support of Tom L. Pegues and Donald A. Capoccia. Additional support received from the American Portrait Gala Endowment.

The Smithsonian’s National Portrait Gallery tells the multifaceted story of America through the individuals who have shaped its culture. Through the visual arts, performing arts and new media, the Portrait Gallery portrays poets and presidents, visionaries and villains, actors and activists whose lives tell the American story.