The Life and Times of Luis Perelman 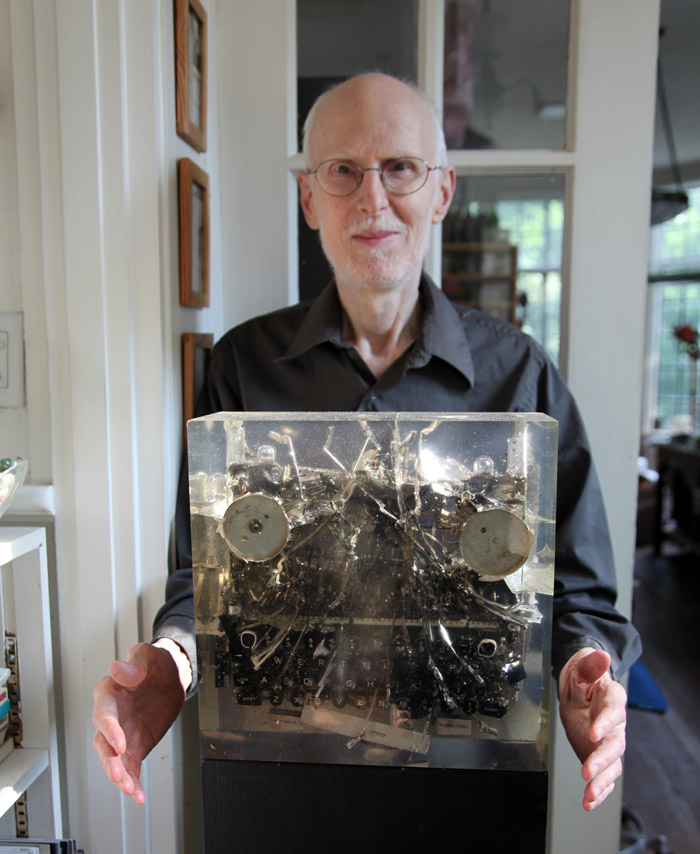 The artist with Resin Typewriter.

L. Brandon Krall:  You grew up in a cultured and affluent family in New York City, your mother was an editor at Look magazine and your father was a psychiatrist.  Talk about your discovery of art, experiences as a child making collages from paper you mother brought home from the Look art department, and mazes. Also please describe your youth attending classes in oil painting, city scenes, learning to stretch canvases at the young age of nine … Your interest in weaving, facture, and precision?
Luis Perelman: These are so many questions. My earliest recollection of doing ‘art’ was when I was seven. I copied maps—the shapes of countries—using crayons.  Around the same time, mother sent my sister and I to ‘study’ art at Art Life Craft Studios, an art school one half block from where we lived.  The owner set up an easel and a stretched canvas near a window and in those days acrylics were not available so I used oil paints, and attempted to paint our street. I started to make collages at this time.  Mother would bring home colored papers from the Art Department at Look Magazine and I was always drawn to collage.  I tended to cut the papers with scissors and occasionally tore them.  Several of these early collages were published in the magazine; I did not have a real talent for drawing.  A few years later, did a series of mazes with a ball-point pen. I think I was trying to re-create an archetypal process of finding a path to freedom.  My interest in collage never went away. In my first year of college, I used one of the walls in my dorm room to make a giant collage/assemblage using found objects.

LBK:  When and how did you realize your interest in abstraction?
LP: I was always drawn to form and color rather than to the depiction of people or nature. As a child and adolescent, my favorite artist was Piet Mondrian.

LBK:  Describe your experiences going on your own to the galleries and museums in New York .
LP:  In the 1950’s the Whitney Museum was temporarily occupying a building on West 54th Street, opposite to and owned by MOMA, so one could walk from one to the other in a single city block. I went often to the galleries in mid town as my family home was nearby.

LBK:  Discuss the “sacredness” that art has for you.
LP:   I think this happened unconsciously at first, before I could articulate my understanding. What is sacred is the act and process of experiencing a greater wholeness and sense of presence through the creative process, whatever form it takes.

LBK:  How did your life change when you went to college at Columbia?
LP:  In my second year at Columbia someone told me about a new translucent casting resin that was sold on Canal Street, so I went downtown to that fabled area and bought a quart. I make a cardboard mold, poured the resin into the mold and dropped various small objects randomly into the mold including a small firecracker that exploded inside the resin. I brought the piece to the school woodshop and the man in charge brought it to one of the machine shops on campus where the sides were machined flat.  The architecture school professor sent it off to a traveling exhibition and the piece was stolen, I never saw it again.  This was my entrée into plastics and subsequently, I started a series of resin castings.

In my third year at Columbia I was assigned a desk in the architecture drafting room next to Art Garfunkel, who at the time was an unknown architecture student. Art and I become friends and he offered to take my work around to galleries. In 1963, he took both my Mark Tobey inspired series of paintings and a resin block and by luck or fate, showed them to Ivan Karp at Leo Castelli gallery. Ivan encouraged me to come in and bring more of my work to the gallery and Ivan sold all the resin pieces that I brought, most to well-known collectors. This process continued for about four years.

In 1967 I met the artist Arman, who was also doing resin castings. Actually, he had someone else doing the castings for him, and he lived in the Chelsea Hotel, and as far as I know did not have a studio. He introduced me to another gallery dealer, Jerry Eisenberg, who wanted to start showing contemporary art and agreed to give me a one-man exhibition. I was young and naïve, and arranged to do this, much to my eventual regret, since it meant severing my association with Leo Castelli.

I had also started doing much more orderly work in which I carefully arranged the objects in a mold rather than randomly dropping them in. Eventually I started doing works that incorporated layers of various kinds of hardware—wing nuts, bolts, screws, etc. in regular rows. I wanted to create three dimensional grids that manifested precision and order. The most interesting part of the process was finding the hardware, which often mean rummaging through bins in deserted warehouses.

LBK:  Talk about the Ape event you did in the 60s.
LP:  This happening was previously hashed out by my friend Jon and Art. We rented an ape suit with a moveable jaw from a costume rental shop in the theatre district. I went out to Central Park with a small entourage on two Sundays and to the Wall Street Area on a weekday. The first time we went to the park, I went to the Metropolitan Museum. I remember going to the Greek vases. Interestingly enough, no one stopped me from wandering around. Finally at the end of my sojourn to the financial district, a policeman told us that we needed a permit to walk around in a costume. 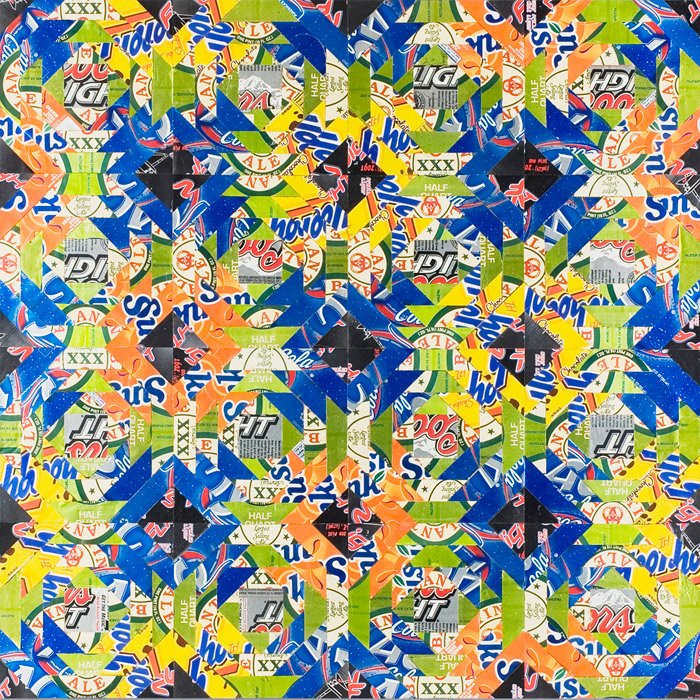 Luis Perelman, 16 Square Pineapple, 2008. Metal strips on board, 28 x 28 in. Featured this summer at The Katonah Museum of Art, New York.

LBK:  In the course of several decades your work evolved in series and incorporated painting in various water-based mediums, when did it became dimensional? How did you find the medium of sheet metal—recycled cans, development of patinas? The most recent resin pieces made use of typewriter parts from typewriter repair places.
LP:  Many questions … I did a series of color field paintings for about two years around 1974, but these never evolved into three dimensional objects. In the 1980’s and 1990’s, I did a number of wall reliefs based on Islamic patterns. I also did shaped wall pieces using copper leaf on wood constructions. I resumed working in resin and made various shaped pieces and eventually started casting old typewriters.

The use of beverage cans came about accidentally. I remember using shredded cans in some of my obelisk towers, and suddenly got the idea of making quilts out of flattened cans which I acquired from beverage wholesalers. The flat quilts eventually evolved into layered constructions. I also started using copper sheet metal on which I applied patinas of various kinds. My current work is the “Kamal” series, dimensional constructions of patterned sheet metal, based on a traditional Islamic design.

LBK:  When did you move to Yonkers and form the Blue Door Art Association and what have been your activities in this time as an advisor and leader in the Yonkers art community?
LP:  I wouldn’t characterize myself as a leader of the Yonkers art community. There are other artists who have also made strong efforts to enhance the arts in Yonkers. Three of us founded Blue Door in 2001. I was the only artist in the group. The other two dropped out and I became the director and moving force. We were offered our present gallery space in 2008. Prior to that time, I organized exhibitions at the Yonkers Riverfront Library where I have also organized and curated yearly exhibitions of Yonkers artists in the new gallery under the auspices of Yonkers Arts.

I am responsible for many of the public art installations in the City of Yonkers including the installation of sculptures at City Hall and the Waterfront Esplanade.  The creation of a mural, Woven Gifts in Southwest Yonkers is also a project as well as the organization of several Windows on Main Street. These involve artist installations in storefronts downtown, and many other projects at additional venues throughout Westchester County.

LBK:  What was your reaction to the Lygia Clark survey show now on view at MoMA?
LP:  I was fascinated by the geometric basis of Clark’s work and particularly by the works made for spectators to actually manipulate and interact with.  They inspired me begin to curate and organize an exhibition of interactive art works by artists working with these concepts wherever they may be.