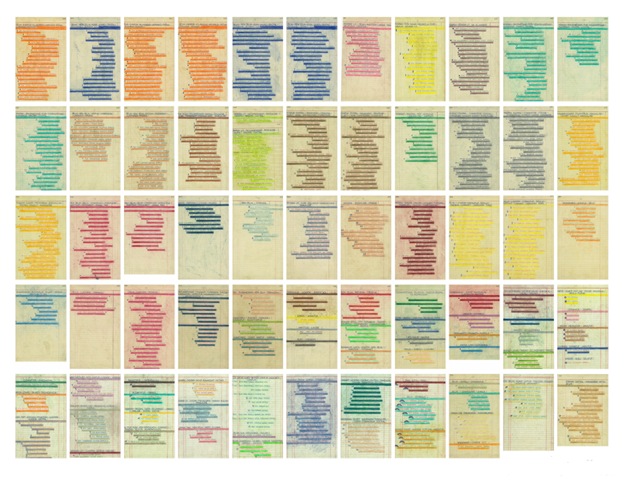 Leah Oates: How did you become an artist and what is your family background?
Judy Blum Reddy: I wanted to be an artist since childhood. My parents fled Austria because of the war and I was born shortly after their arrival. As an only child, they were always very supportive of my whimsies. I went to Cooper Union after high school, then I told my parents I wanted to study etching at the Atelier 17 in Paris. They said OK but that I had to earn a little of my own money first. So I got a job at the pet department in Macy’s. I was fired shortly after being hired when I accidentally let all the parakeets out of their giant cage, which accelerated my departure for Europe. At the Atelier 17 I met Krishna Reddy, the Indian artist, who became my husband and we settled in New York in 1974.

By the way, Macy’s doesn’t have a pet department anymore.

LO: Your work is a series of lists and highlight bureaucracy, obsession and on the surface a need for control. Tell us more about the themes in your work.
JBR: Well I lived in Paris for ten years and the French are the world champions of bureaucracy. They most likely inspired me.

Extensive travel also inspired my interest in maps. Discovering foreign cities, the details of other cultures, is exciting, but also frustrating and harrowing; like a puzzle to decipher. Maps have an absurd quality. Behind a tiny dot are the lives of millions of people. How can you make any sense out of that?

Also I guess I see life as an ineluctable struggle against disorder. That’s probably why I’m preoccupied with fathomless inventories and compilations.
One of my works lists all the destinations of the Indian railroad and another has 298 panels naming all the streets in Venice, which took me three years to do. I think it’s important to decline and to organize things; it’s reassuring. Maybe I’ve transformed my angst into compulsion.

LO: As a long time NYC resident how do you think the NYC art scene is compared to what is used to be? What are the pros and cons of the scene
now and before in your opinion?
JBR: As an outsider, I can’t really answer that question, but I suppose it partially echoes the evolution of other aspects of New York society: less whimsical, less fraternal, more individualistic, more elitist, more venal …

LO: Why do you think art is important to people and to the world?
JBR: For the usual reasons: art remains a humanizing and civilizing force in our society; it’s an ancient and universal language which permits all people to communicate and to record their history…

LO: What advice would you give an artist who has just arrived in NYC and who is not sure where to begin?
JBR: Get a job which will enable you to survive and to devote time to your work, then work; talk to people, try to enjoy life.

LO: Who are you favorite artists and why?
JBR: Nancy Spero, Paul Klee, David Schrigley … I can’t really explain why, but I suppose humor has something to do with it …