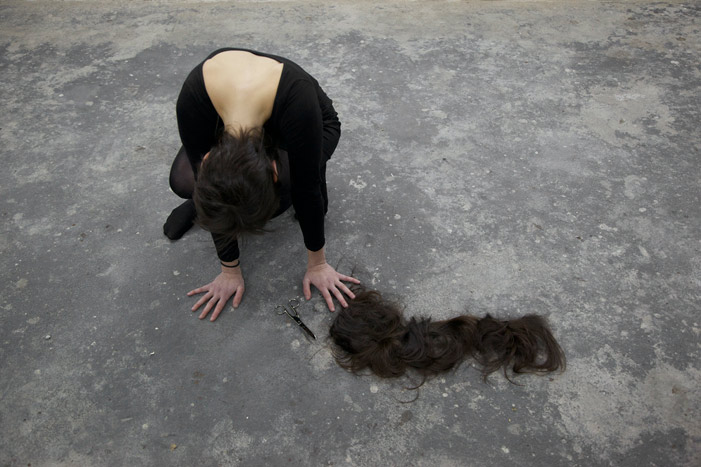 Leah Oates: How did you become an artist and what is your family background?
Elana Katz: I come from a family involved in the arts, both of my parents are classical musicians, my grandmother was a painter, my aunt is a poet, and I myself was trained as a classical ballerina as a child, very intensively in the Russian “vagonova” method. I left dance as a teenager as it is a brutal and even destructive world; creative expression involving the use of the body, however, is a fundamental need of mine. It has been a part of my life since childhood, and really I cannot exist without this.

During my undergraduate studies at Parsons School of Design I majored in photography, and I found myself doing mostly performative work—performing for the camera. It wasn’t until the end of my BFA studies that I realized what was crucially missing from this practice was the live performance itself—the physical body in time, used as a vehicle for communication, and the engagement and interaction with a live audience. I started working primarily with performance art as a medium in 2008, and knew that I had found my most fulfilling means of creative expression. I have remained focused on this practice all through my time living in Berlin and working internationally.

LO: What are the ideas in your work and what is your working process?
EK: My topics of focus vary, in some cases I’m concentrated on challenging the limitations of the body, in other instances on making a commentary on cultural/social conventions, and often these days I’m concentrated on post-memory and historical perception. Foundational to all my work, however, is an aim to create an experience of questioning and even unlearning what is assumed in society.

In terms of creative process, I never know when ideas will come to me. What will resonate and stimulate ideas, or simply intrigue, is always unpredictable. In some cases, I know that I am engaged by a set of circumstances and that I want to make an artistic commentary on it, but the idea for the artwork doesn’t come until later. I am very visual, so frequently the idea for a performance, or photo, video, or installation piece surfaces as a visual image. And, a great deal of what I do is based on intuition—an artist should never disregard intuition. Even if one doesn’t understand immediately one’s intuitive decision, in my experience, an understanding always comes in retrospect. In this way I actually learn a lot from my own work.

LO: What is it like as the artist being observed in a performance and also observing the audience at the same time. Does it give you a creative boost?
EK: I gain a great deal of energy from the audience, even without direct contact. I can feel their presence, even though most of the time my performances don’t even involve eye contact. The presence of the public almost always produces creative strength in me—even when I don’t feel their support. If I feel judged by them, for instance, I still feel their engagement, their participation, and I gain strength from this.

LO: What kind of reactions and impressions have your performance works had from audience members?
EK: In some cases my work strikes a cord in the viewer and they understand it and connect with it immediately. I am always thrilled when this happens of course, as it means that my communication was absorbed in a very straightforward manner. Sometimes the public is also made uncomfortable by my performances, and they respond in a way that is judgmental or mocking, and I consider such responses to be also be very important and even successful, as it means my work has generated a challenging situation for the viewer. Performance work has the potential to provoke thought and feeling, so in fact I find that whenever this occurs, it means that the work is powerful, and it is thus successful work.

LO: Why do you think art is important to people and to the world?
EK: Art has the potential to make one see the world in new ways; it can awaken an understanding (whether this be visual, sensory, or conceptual), within the viewer through the unique sensitivity of the work, and it has the capacity to force one to question and step outside of what one knows.

LO: What advice would you give an artist who has just arrived in NYC and who is not sure where to begin?
EK: I really wouldn’t know what advice to give, I am not based in New York myself, and I have not lived in New York City as a working professional for any extended period of time (only for several months in 2010, when I moved back to the city to work as a re-performer for Marina Abramovic during her retrospective at MoMA). I actually might tell them to first go someplace else in order to build a practice in an environment conducive to creativity and with less financial pressure than in New York. This is what I have done myself in Berlin. I do intend to return to New York one day soon, however. The city has such a remarkable energy, it is stimulating and inspiring like no place else. Once one has built some experience and accomplishment as an artist, surviving in New York without compromising one’s practice is more reachable, this is my impression at least. Let’s see in the next few years if I’m right about that

All of them, in completely different ways, make me see the world in new ways. They awaken understandings within me through their unique sensitivity, and/or they force me to question and step outside of what I know.

LO: What are your upcoming projects?
EK: I am currently working on an extensive project in the Balkans titled Spaced Memory, which pertains to places of Jewish history that no longer exist—that were destroyed, built-over, and forgotten. I work with mostly site-specific performances to contemplate the topics of post-memory and absence at these locations of historical erasure. I recently financed the work through a successful crowdfunding campaign, with the help of over 131 contributors. In May I had two performances within the frame of this project in Belgrade, where I worked in collaboration with the REX Cultural Center and the Embassy of Israel in Serbia. I will be continuing the project this spring in Serbia and Kosovo, and in the fall I will be researching and creating site-specific artwork in Romania.

In June, I have a new series of performances and a solo exhibition in Belgrade at Gallery 12 HUB. It is titled Blue Holding, and the work deals with references to corporeal pain, the live and dead body, and the body as an instrument. This show runs June 05 – 20, with performances on June 5th, 6th, and 7th.

In July I will be performing in New York, I’m excited to be working for the first time with Station Independent Projects on the Lower East Side. I will be doing a new performance that pertains to cultural assimilation, and the piece will result in an installation which will remain on view for several days at the gallery.

In 2015 I’m also planning a new large-scale performance in Germany, which will deal with the memory/ post-memory of my family history in Aachen (Western Germany). This work will deal again with the topic of cultural assimilation, and will also, somewhat indirectly, contemplate methods of commemoration of the World War II period.