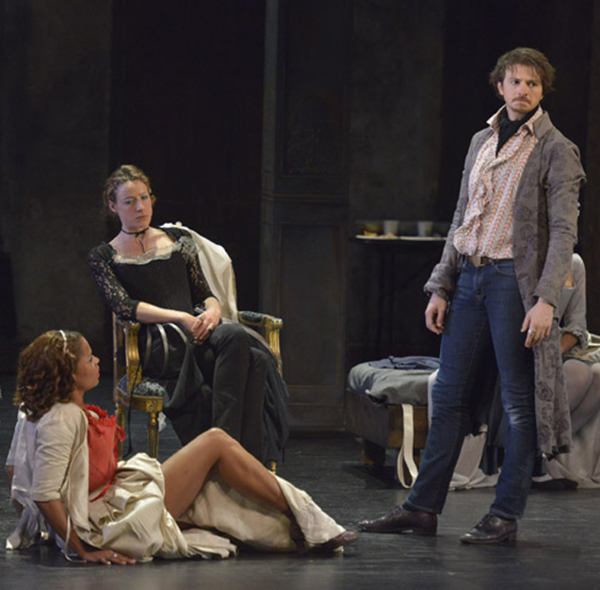 When John Malkovitch played Vicomte de Valmont in a renowned film, Dangerous Liasons (1988), based on a novel by Choderlos de Laclos and directed by Stephen Frears, his performance was unexpected and stunning. Now, 25 years later, Malkovitch’s decision to direct Dangerous Liasons onstage as “a play that never pretended to be a movie,” is brave but yet ineffective. The modern interpretation by the director, done in the original language and with a young cast of actors, was presented as a part of a recent festival at Lincoln Center.

As Marquise de Merteuil and Valmont appear on stage to play their manipulative games of love, we soon find out that they do not leave when the scene changes. Instead, together with the rest of the characters, they remain on stage and observe each other throughout the performance. This visual transparency gives an interesting twist to the plot where secrecy and characters’ hidden motifs are prevalent. The director’s choice of actors is surprising and unexpected as Marquise, played by Julie Moulier, is mannish, Cecile (Agathe Le Bourdonnec) is too infantile, and Valmont (Yannik Landrein) lacks any originality. The weapon of their virtuosic cruel games in Malkovitch’s re-envision is not hand written letters as in Choderlos de Laclos’ original novel, but text messages and emails on Ipads and cellphones.

In the minimalist settings of Pierre-Francois Limbosch, the bed is the main component of the play and is shifted around the stage by the main characters as the scenes change. The peeling walls are set against the Romanesque columns, which at the duel scene turn into trees, and add deconstructive element to the aristocratic household. The costume design by Mina Ly seems to perfectly match the setting where Marquise is stripped from a full skirt and Valmond strolls in jeans instead of wearing court dresses that are so natural for 18th century.

Adapted for the stage by Christopher Hampton, who was also a screenwriter for the film by Stephen Frears, there are only minor changes made to the script. Consistent with the text and all its dialogues, the play also borrows some visual elements from the film. In the 2 hour 35 minute duration of Dangerous Liasons, which is performed in French with English supertitles, there seems to be an abundance of text with very little expressiveness. Often the lines are rushed through without a single pause, which gives the audience no time to read the subtitles or to concentrate on the actors.  All the beauty of the film where what is being said is as much important as what is not being said, all the moments of silence, and the way the characters communicated with meaningful and sensual eye contact – all of this escaped the direction of John Malkovitch.

The duel scene between Vicomte de Valmont and Chevalier Danceny, being one of the most tragic moments of the play, is without a doubt the most compelling and beautifully staged scenes. The audience finds themselves in the darkness with only strokes of flashlight illuminating the fatal encounter of the two, the music composed by Nicolas Errera adding a rhythmic intensity to the fight. Some artistic decisions of the play Dangerous Liasons are imaginative and clear, and provide an attempt to give a new perspective to Choderlos de Laclos’ novel. However, it seems that the modern interpretation by John Malkovitch brings nothing new to this controversial tale of seduction, perversity, and lust.