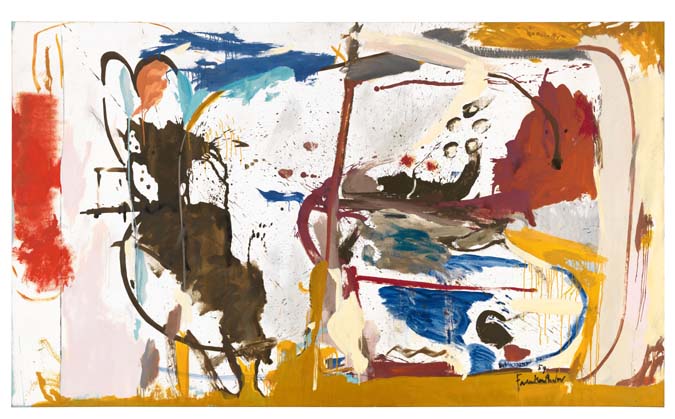 Gagosian is pleased to present “Helen Frankenthaler: After Abstract Expressionism, 1959–1962.” The first major exhibition of Frankenthaler’s work in Paris in more than fifty years, it includes paintings and works on paper, several of which have not been exhibited since the early 1960s.

Comprising fourteen paintings and two works on paper, the exhibition explores a radical, lesser-known body of work, picking up at the very end of the period in Frankenthaler’s career treated in “Painted on 21st Street: Helen Frankenthaler from 1950 to 1959” at Gagosian West 21st Street, in 2013. The works in the 2013 exhibition revealed Frankenthaler’s invention of the technique of pouring and brushing turpentine-thinned paint so that it soaked into raw canvas. In contrast, the current exhibition reveals her deliberate return to the gestural improvisation of Abstract Expressionism, as a way of moving her practice forward. John Elderfield, borrowing the term from an early critic, the poet James Schuyler, calls the first group of paintings from 1959–60 “think-tough, paint-tough,” characterized by imposing scale and vigorously expressive brushwork. They include the mural-like, freely painted First Creatures (1959), an abstract, indeterminate landscape exhibited here for the first time, as well as Mediterranean Thoughts (1960), in which Frankenthaler’s looping skeins of poured paint create partitions of varying sizes, many filled, or almost filled, with several different colors, leaving very little exposed canvas.

By 1961–62, Frankenthaler had moved on to make paintings that were quieter and more calligraphic. Coinciding with her first forays into printmaking, graphic paintings like Italian Beach (1960) and May Scene (1961) employ an economy of line not commonly seen in her earlier works. Their simplicity is heightened by areas of canvas left bare, larger than those in the paintings of the 1950s. In some canvases in this group, the unpainted negative spaces are shaped like silhouettes of swans. When this imagery appeared in her work, Frankenthaler embraced it, saying: “At some point I recognized a birdlike shape—I was ready for it—and I developed it from there.”

The exhibition is accompanied by a bilingual, fully illustrated catalogue, including a new essay by John Elderfield.

Helen Frankenthaler (1928–2011), whose career spanned six decades, has long been recognized as one of the great American artists of the twentieth century. She was eminent among the second generation of postwar American abstract painters and is widely credited for playing a pivotal role in the transition from Abstract Expressionism to Color Field painting. Through her invention of the soak-stain technique, she expanded the possibilities of abstract painting, while at times referencing figuration and landscape in unique ways. She produced a body of work whose impact on contemporary art has been profound and continues to grow. Her works are in major museums and collections worldwide, and her career has been the subject of three major monographs and numerous institutional exhibitions, including “Helen Frankenthaler: Paintings,” The Jewish Museum, New York (1960); “Helen Frankenthaler,” Whitney Museum of American Art, New York (1969, traveled to Whitechapel Gallery, London; Orangerie Herrenhausen, Hanover; and Kongresshalle, Berlin); “Helen Frankenthaler: A Paintings Retrospective,” Modern Art Museum of Fort Worth (1989–90, traveled to Museum of Modern Art, New York; Los Angeles County Museum of Art; and Detroit Institute of Arts); “Helen Frankenthaler: Prints,” National Gallery of Art, Washington, D.C. (1993, traveled to San Diego Museum of Fine Arts; Museum of Fine Arts, Boston; Contemporary Arts Center, Cincinnati; and Machida City Museum of Graphic Arts, Japan); “Frankenthaler: Paintings on Paper (1949–2002),” Museum of Contemporary Art, North Miami, FL (2004, traveled to Edinburgh Royal Scottish Academy, Scotland); “Against the Grain: the Woodcuts of Helen Frankenthaler,” National Gallery of Australia, Canberra (2005); and “Giving Up One’s Mark: Helen Frankenthaler in the 1960s and 1970s,” Albright-Knox Art Gallery, Buffalo, NY (2014–15).