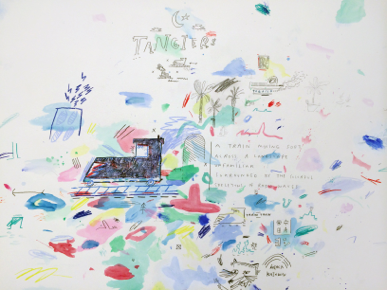 Bryce Wolkowitz Gallery is pleased to present Department of the Interior, an exhibition of the Brooklyn based multi-disciplinary artist Gordon Harrison Hull.

The exhibit will feature large works on paper with mixed mediums of acrylic, watercolor, ink, pencil, pen, and collage. The work owes its conception and creation to a multitude of whimsical elements that evoke colorful emotional landscapes, multi-cultural channel surfing and soft, faded fragments of dream. Based on a concept he calls ‘lo-fi magic’ that is strongly influenced by the rituals and rhythms of Africa, Hull’s work explores dada-ism, the supernatural, poetry, mark- making, primitivism, dance, abstract expressionism, travel, symbolism, laughter and perhaps most importantly – acts of spontaneity and serendipity.

Gordon Harrison Hull was born on September 5, 1977- the result of a pregnancy brought about by a fertility dress made for his mother by an Ashanti witch doctor in Kumasi, Ghana. He was raised on his family’s apple orchard in Warwick, NY and subsequently moved to New York to study shamanism, art and creative theory at the Gallatin school at NYU. The unusual circumstance surrounding his birth, childhood and course of study was the foreshadowing of his works to come in the way that he injects originality, energy and soul into all his projects.

He was a founder and creative director of the multi-disciplinary Parisian creative group/fashion brand Surface to Air from its inception in 2000 until 2011. He currently lives in Brooklyn with his wife Gillian Schwartz and their son, Guy.