From Kitsch to the Coffin: Irena Jurek talks to Brent Birnbaum 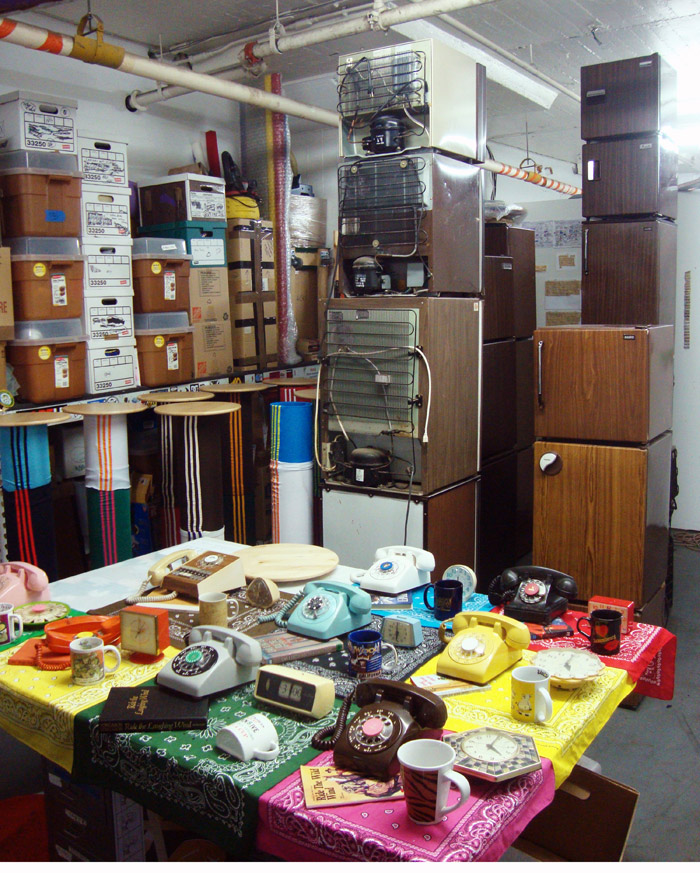 Studio shot courtesy of the artist.

Irena Jurek: You are an ardent collector of pop cultural ephemera. The lines between your art and collecting often blur. Did your interest in art as well as collecting develop simultaneously or did one precede the other?

Brent Birnbaum: Certainly. I was collecting and saving things before I was making art. I just knew I was attracted to certain objects and I would save them. I wasn’t sure why or what I was going to do with them.

IJ: You have the largest collection of Vanilla Ice memorabilia in the world. A few years ago you held a performance as Ice Ice Maybe, your incarnation of Vanilla Ice’s alter ego.  Many of your ideas seem to emerge from the objects that you collect and are drawn to.

BB: It’s a combination of the objects I collect and the particular space I’m invited to do a show. The venue for Ice Ice Maybe was an old Tower Records and I knew 2010 was the 20-year anniversary of Ice’s To The Extreme Album. It was an alter ego but also an homage to my love of camp. My recent performances have been moving in the opposite direction involving just me, or me with one object, and addressing very different concerns than the kitsch.

IJ: It seems that lately your work is shifting from the spectacle of pop culture to more existential themes of life and death as well as questions of meaning and purpose.

BB: Very true. My interest has shifted. I spent a lot of time thinking about objects that are not used in an art context and objects that other artists have not used. It’s been a good run, but I’ve just become more interested in existential questions and even formal issues.

IJ: You have an upcoming museum solo show at Casino Luxembourg, called Ride (W/) The Wind. You mentioned that the show is based on Einstein’s definition of insanity, could you talk a little more about that?

BB: Sure, his definition is repeating the same thing over and over again, expecting different results. I combined that with another phrase, which is “wearing the world like a loose garment.” I see Einstein’s definition of insanity as a real negative force. The museum show is designed like a labyrinth. There are nine rooms and you must pass through them all once you enter, in order to exit. All of the rooms are going to look very similar, just in different colors. It’s supposed to be disorienting giving the viewer a sense of repeating the same thing over and over again.

Then the other phrase is the positive force, wearing the world like a loose garment. Which actually goes back to your first question about collecting things. I’m at this transition, and wearing the world as a loose garment is about letting things flow through you either physically or mentally. I’ve been thinking about it a lot, after moving to the Rockaways. Before I had been living in Greenpoint for eight years where I had been able to amass really large collections of things. I went through a purge where I filled two dumpsters and threw out sixty boxes.

IJ: So it’s almost a show about duality.

BB: Yes, that’s a good way of putting it.

IJ: Your idea also reminds me of the idea that all painters paint the same painting over and over again or Ad Reinhardt’s ‘black’ paintings, where each painting at first glance appears to be the same, but under further inspection reveals a work of great nuance and variation.

BB: When you say that the show is about dualities, it is. And the title, Ride (W/) The Wind, is referencing the ups and downs of our life. We all have the highs and lows. We are always living in the dualities.

IJ: Yeah, because nothing is ever perfect. Things are always off.

BB: Or you feel really good about one thing and really shitty about another, and everything just flows. The nine rooms are a microcosm of people’s lives. It starts with references to childhood and it ends with references to death. It covers everything in between; in rooms two through eight, it talks about your dream job, how much money is in your bank account, your sex life, lying, cheating, stealing, and it ends referencing the afterlife and what you think happens to you when you die.

IJ: Audience participation is really important to your work; a lot of work doesn’t consider the viewer’s experience to the same degree.

BB: I feel like I’m more in the Tino Seghal camp. I need other people to complete my projects. My desire to do performance lately has stemmed from my curiosity of engaging with strangers and combining that with my art making practice.

IJ: So there’s a lot of chance and improvisation that comes together in the performances. There’s this variable that you have no control over.

BB: Yes, there’s no foreseeing what comes out of my mouth or how I react. I like that risk, this unknown territory with an art show. The participatory direction I’m moving in is more into the unknown area where I’m not as controlling with how I want the outcome to be.

IJ: Much of your work seems to be about defining and redefining these patterns and meanings in the world. You come up with these elaborate systems and you often position one system against the next. Before you were doing these intricate, maximalist installations and collages, whereas now you’re going toward a more minimal idea. It seems like the idea of dualities not only exists in the upcoming Luxemburg show, but is also a recurring thread in your work.

BB: Yes, I get excited by exploring new territory and new modes of working and not just for myself, I’m also excited by other artists who are pushing the boundaries of how art can be made, like Nate Hill, Ryan McNamara, and I previously mentioned Tino Seghal, of course.

What I like about performative work is that the history is still largely unwritten and there’s more opportunity for me to explore so many more different areas and possibilities.