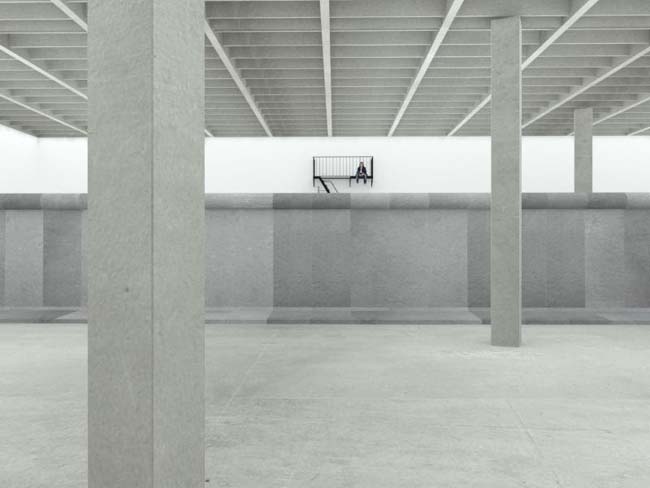 The acclaimed artist duo to show a monumental installation and several sculptural works in
Israel’s leading contemporary art museum.
Tel Aviv Museum of Art, Israel’s leading institution of contemporary art, is pleased to announce Powerless Structures, an exhibition by the artist duo Elmgreen & Dragset, taking place in several of the museum’s exhibition spaces and galleries, opening March 31.
Powerless Structures is the centerpiece of Tel Aviv Museum of Art’s 2016 international exhibition program, and is adapted specifically for the museum’s layout. The exhibition is titled after a well-known series of the artists’ works that investigates how structures-whether political, social, financial, cultural or physical-have the potential to be altered or interchanged, since these structures depend solely on our acceptance of their power. The exhibition’s fragmented trajectory features eight works positioned throughout the museum’s various galleries and its sculpture garden.
Upon entering the Herta & Paul Amir Wing at the Tel Aviv Museum of Art, viewers will witness
Donation Box (2006), a transparent glass box on a plinth filled with unexpected objects such as a worn sneaker, a car key, a flight ticket, a package of condoms, and a “Do Not Disturb” sign, among plenty of other items, rather than only coins and notes. The box remains sealed off from additional donations.
Nestled in the heart of the museum, viewers will encounter Modern Moses (2006), a wax figure of a baby in a carrycot lying on the ground beneath a cash machine. This installation presents a contemporary interpretation of the biblical story of the abandoned Moses in the neo-liberal economic system.
In the museum’s lower level is Other Landscapes (2016), a new
installation appearing as the partially-applied wall signage for a (fictional) exhibition by Matisse that has yet to open, alongside scaffolding and tools that seem to have been left behind by the museum’s technical crew.
Inside the Lilly & Yoel Moshe Epstein Multi-Purpose Gallery, the largest space in the museum, hangs The Future (2014), an installation of a lonely and pensive teenage boy sitting atop a fire escape. The Future is positioned together with a new installation, For as Long as It Lasts (2016), a full-size replica of a section of the iconic Berlin wall, which bifurcates the vast hall. The wall serves as a blank surface for projection that can change according to each individual spectator, and also references Elmgreen & Dragset’s shared history in Berlin, where the artists, like many others, moved in 1997 as a direct result of the fall of the Berlin wall. In front of the wall stands Zimmerstrasse (2016), a Berlin street sign indicating a central street that hosted many art galleries in the beginning of the millennium, near the historically significant crossing point Checkpoint Charlie.
In the museum’s Main Building, viewers will discern Portraits of the Artist (2014) among the European Art of the 16th-19th Centuries, in the Ruth and Bruce Rappaport Gallery. Here, two faded rectangles imply the absence of a pair of portraits, which are no longer hanging on the wall. The title refers to Elmgreen & Dragset as a single entity, and the faint traces underscore the idea that eventually, all of our portraits will be taken down at some point: history will be re-written or our personal hard drives will crash, Instagram or Facebook will no longer be relevant, and the images that served as profiles of our identities might vanish and exist only as distant memories.
Wishing Well/Powerless Structures, Fig. 166 (2016), the final work of the exhibition, is situated in the museum’s sculpture garden, and depicts a sealed, round, pool-like well dug into the ground. The coins inside the well seem familiar, but when seen up close, it becomes apparent they are blank, with no denominations.
Each of Elmgreen & Dragset’s works in Powerless Structures evokes a feeling of something that has been left behind, forgotten, forsaken or is waiting for an action to happen. The artists subvert the power of various structures throughout the exhibition, disrupting our original associations and expectations, and creating a resounding sense of unease, with space for reflection and hope.
This is the first time the work of the acclaimed artist duo has been shown in Israel. The artists will give a talk on April 1, 2016, the day after the exhibition opening.
Tel Aviv Museum of Art  www.tamuseum.org.il