The Devil in the Details: Kenneth Anger 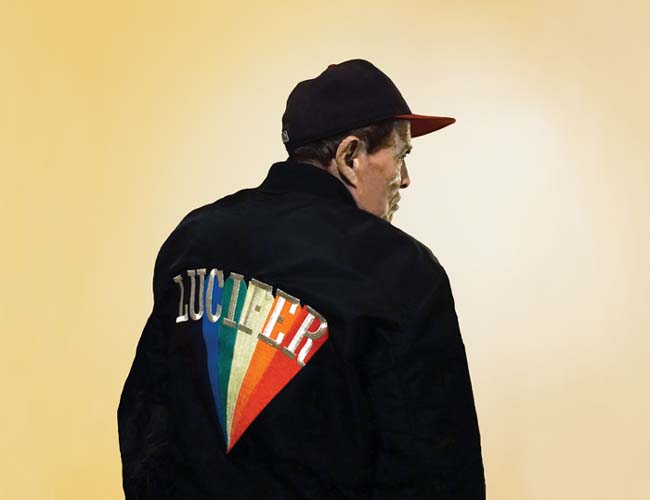 The Devil in the Details: Kenneth Anger, the Inventor of a Celluloid Avant-Garde, Nears 90

With his films moving from fringe theaters to MoMA, the director grants a rare interview at his old Hollywood haunts

Last December, my car left the apartment complex on North Hayworth Avenue where, in 1940, F. Scott Fitzgerald suffered a heart attack and died. My driver took me up past Sunset Boulevard to Hollywood Boulevard, heading east, traversing the same road that, when it was just dirt, hosted horseback races between Douglas Fairbanks and Charlie Chaplin. The loser would pick up the tab at the Musso & Frank Grill, where I was headed. When I arrived, I asked the man at the front desk about a reservation for Kenneth Anger and his face went white.

Anger walked in 20 minutes later, and the waiters swiveled to see him—the whole room did. He was scowling, eyes glaring, and wearing a track jacket emblazoned on the back with the word “LUCIFER.” A host led him to a booth. Musso & Frank is the oldest restaurant in Hollywood, but only a few years older than Anger, America’s first avant-garde filmmaker.“I went to Beverly Hills High School, and there used to be a red car, a streetcar—it doesn’t exist anymore—but I used to take that from Beverly Hills to Hollywood, and come to Musso & Frank,” Anger told me.Anger is 88. He ordered a glass of red wine. The darkly handsome, mischievous face of his youth—Brando with a touch of evil—was still there, buried under slackened skin. He spoke slowly at the start, then sped up. He would look right at me, then look down at the table, in the direction of my phone, which was recording us. He kept caressing the cracks on the phone’s broken screen.“So,” he said. “I’ve been coming here since I was a teenager.”Slouching in the red vinyl booth, he looked around the restaurant, and talked about his childhood.“My grandmother took me to see Al Jolson in The Singing Fool,” Anger went on. “Mostly it was silent with titles, then, suddenly, Al Jolson comes on and says, ‘You ain’t heard nothin’ yet!’ And this electrified the audience at the time.”I asked him what he felt when he saw The Singing Fool.“I wanted to be an individual artist making film,” Anger said.