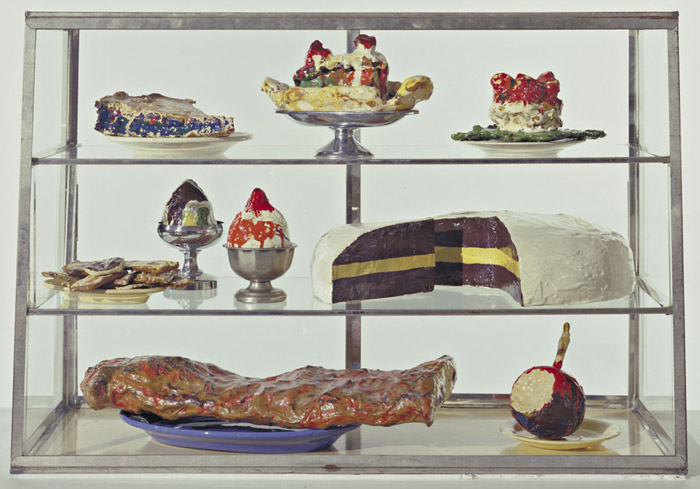 Claes Oldenburg is an artist without flamboyance or careful propriety. He is thus very American, and being American, it is not strange that he was born in 1929 outside of America, actually in Sweden. He should have explained in 1960 that, “I make my work out of everyday experiences, which I find as perplexing and extraordinary as can be.”

A viewer will not be surprised, therefore, to find among his art works store objects –a watch in case, cupcakes, socks, a hanging dress, and a hamburger. Ah, America; objects, objects, objects, in (of course) streets and stores. Oldenburg wrote, “I turned my vision down, the paper became a metaphor for the pavement, its walls were gutters and fences. I drew the materials found on the street –including the human. A person on the street is more of the street than he is a human.”

The drawing at that time takes on an ugliness which is a mimicry of the scrawls and patterns of street graffiti. It celebrates irrationality, disconnection, violence and stunted expression – the damaged life forces of the city street. Pop, therefore, is everywhere – enlarged, enlarged, enlarged. But there always seems to be questions in Oldenburg’s work. He looks and observes chiefly with an ironic twist. Perhaps it is because, as he wrote, “The artist is communicator, and from experience he knows how difficult it is to communicate the pure senses of being alive.”

The exhibition remains at MoMA until August 5, 2013.