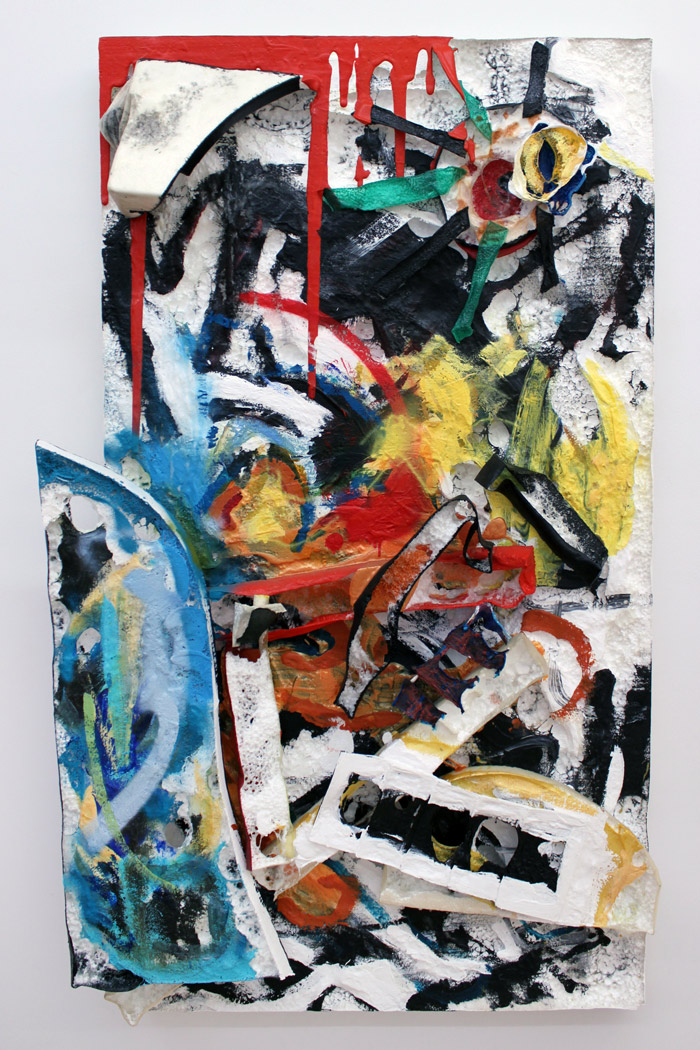 One of the fundamental games introduced to us as children was a set of building blocks. With unhindered imaginations and seemingly infinite possibilities for rearranging the fragments, we gradually learned depth perception, spatiality, physics, and creative expression. These pieces became representational, familial, and even tools for translating the things that we thought were visually interesting.

BravinLee programs features artists Leslie Baum, Stacy Fisher, and Matt Miller, whose processes begin by anchoring sculptural and painted forms that they regard as building blocks to fully realize and articulate a statement. Decisively situated on walls, custom-made pedestals, and hardwood floors, each painting and sculptural component bears enough conceptual and visual thrust to be appreciated individually. However, Baum, Fisher, and Miller are not fixated solely on the parts that make the whole. Escaping the confines of the canvas and responding to their contextual surroundings, they use the gallery space as a natural outgrowth from two-dimensional format and effectively defy categorization as solely painters or sculptors.

Yet the distinctions between each body of work are what make this exhibition memorable. Integrated together in the gallery, instead of separated by partitions or expansive space, the works create a visual conversation with one another, accentuating the narrative of building blocks and variable groupings. Leslie Baum activates the gallery space in her recent body of work called Particular Histories, which consists of pop up drawings, collages, large-scale oils, paper cut outs, standing floor paintings, and watercolor and spray painted drawings. Like the children’s game of telephone, she indirectly engages a sampling from the modern canon and progressively abstracts each fragment so that iteration after iteration, the historical reference is distorted from its immediate predecessor. Relenting to accidental and inadvertent gestures, Baum assembles the individual elements so that they are “able to hold their own, but have the generosity to be part of a whole.” 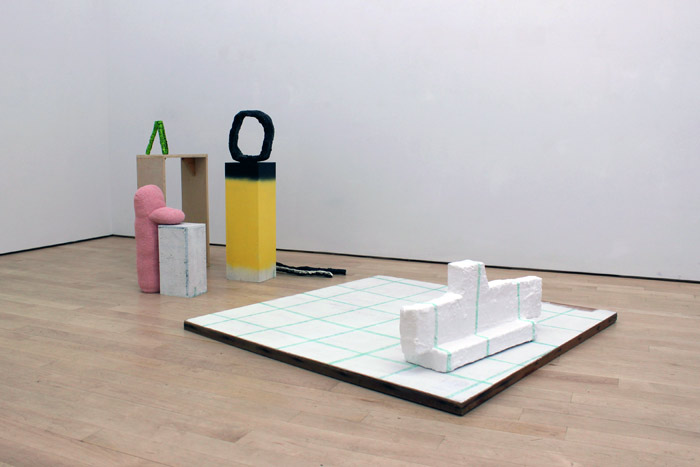 Familiar Places, a grouped installation by Stacy Fisher, is informed by the artist’s contemplation of the pedestal as a companion to sculpture. Pedestals elevate the sculptures to a certain eye level, support them entirely, or merely provide a place for them to be. Mindful of this co-dependence, she uses mostly wood, hydrocal, and paint to visually translate space and collectively create meaning. Fisher experiments through trial-and-error to group and isolate pieces from previous series of her artwork. This serves to yield new interpretations, as well as decides whether to emphasize or downplay the differentiation between where the pedestal ends and the so-called piece begins. Her practice not only resembles a game in the sense that the sculptures act as pawns and the pedestals as the game board, but also her faith in the viewer’s memory to associate arrangements of what they saw in the past with what they are seeing currently.

Matt Miller’s process involves painting on polystyrene and then treating the surfaces with chemicals. Using pre-built components that he has painted and collected over time, he uses the analogy of children’s building blocks to describe the architectural nature of his compositions. He creates a record of improvised movements and decisions by first applying varying layers of paint to the surfaces of his work, then manipulates, distorts, and obliterates the original painting by chemically reducing the paint marks. The resulting patterns of melted foam gives importance to the negative space and causes it to seem equally, if not more, significant than the marks themselves. If he begins to see a recognizable image, he will tease it out, bury it, and pull it to the surface again until he accomplishes his desired aesthetic.

Among the long list of exhibition openings to be anticipated this fall, Leslie Baum, Stacy Fisher, Matt Miller deserves its own spotlight. Experienced piece by piece, this group exhibition offers a sense of personalization, as the viewer is not confined to any designated route or order. There, visitors can immerse themselves in the interplay between intention and spontaneity, celebrate the individual moments acknowledged and overlooked, and build an experience as a whole.