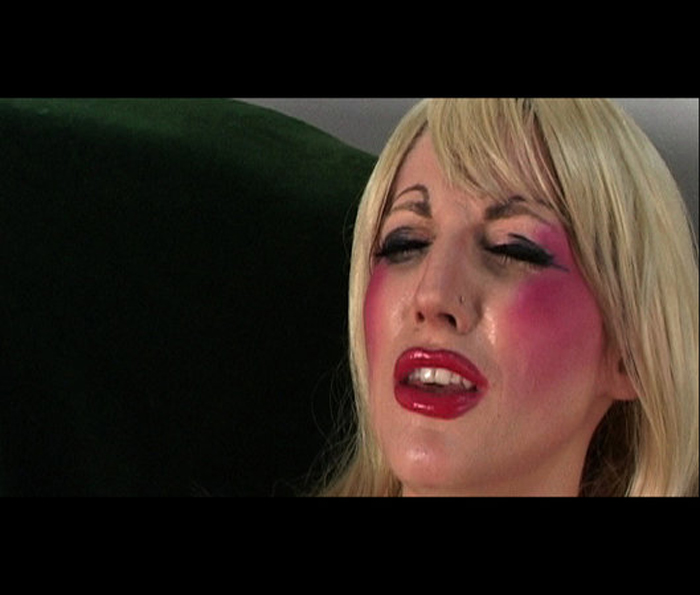 The camera zooms in on small notepad and a pen poised motionless over the page, while the sounds of a pen scratching paper play over the film’s audio. This disconnect between image and reality is a frequent occurrence in the works of Brice Dellsperger’s evocative series, “Body Double: Vous N’en Croirez Pas Vos Yeux,” currently on view at both Team Gallery’s 47 Wooster and 83 Grand locations. The exhibition challenges traditional images that saturate popular media with its parodies of iconic film scenes. Team Gallery will show all thirty works from the series during the show’s two-month span, with the films changing weekly. Each week, The Grand Street location features one, large-scale, single-channel projection, while the Wooster Street location shows five films on both single-channel and multiple-channel monitors.

The films feature actors, often the artist himself or Jean-Luc Verna, dressed as women, playing characters from films such as Psycho and Dressed to Kill. What may come across as humorous at first glace—actors with bad wigs and imperfect editing, such as tapping feet and scribbling pens that don’t quite match the film’s audio—raise questions surrounding narrative, film theory, and gender identity. Clearly, Dellsperger’s versions are not finessed objects, like their Hollywood doppelgängers. The films in “Body Double” are evasive art objects, straddling the line between appropriation and creation. Although these works are nearly copies of the original versions, the films take on new meaning and unique significance in a larger conversation surrounding the depiction of nontraditional identities in popular media.

The works in “Body Double” subvert the traditional male gaze of feminist film theory. It’s not quite clear who is the intended viewer of Dellsperger’s films. In Body Double 13 (After Saturday Night Fever), the artist is dressed as two different characters, both women, who look amorously into each other’s eyes and spin around one another while the Bee Gee’s “More Than a Woman” plays in the background. The film’s effect is bizarre and ironic, bordering on kitsch. The original narrative is disrupted, and it no longer matters whether you are familiar with the source material or not. Dellsperger is challenging tropes that pervade Hollywood cinema and shape the way that we view film. “Body Double” uses humor as a vehicle to confront broader issues of representation and identity in popular media. These are provocative works disguised as satire.