Ben Pritchard on James Cullinane: Into a Place Beyond 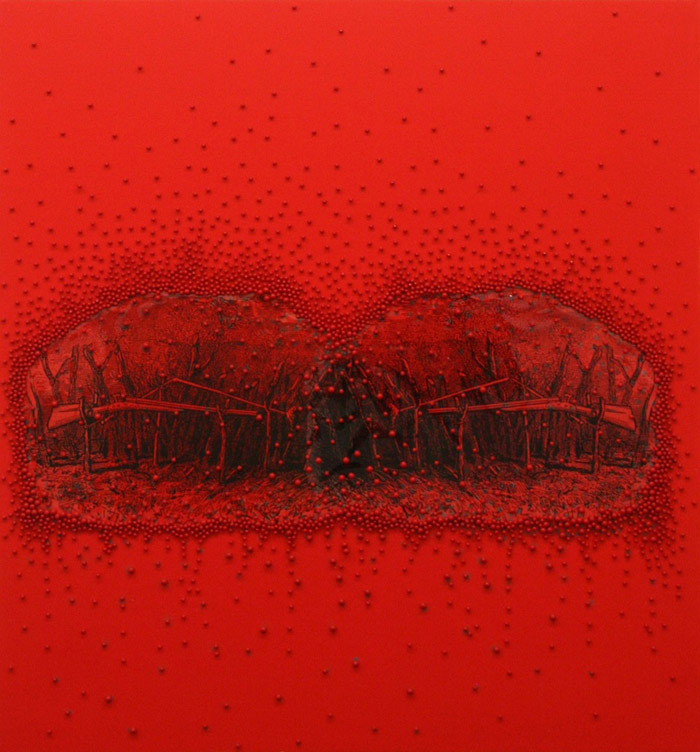 It is always a joy to see an exhibition that immediately establishes a specific intention. It is even more enjoyable when the artist goes about exploring and developing this intention and pushes a way of working into a place beyond an initial thematic logic, into something or somewhere else.

James Cullinane’s show Limbus at Robert Henry Contemporary (opening Friday, September 6, 2013) goes to that other place—or maybe keeps us in place as its basic imposition of traps as metaphor works its way into the head of the viewer.

At first, this new series of painted red squares (12”x12”) and rectangles (30”x28”) with a laminated image of an impossible situation, or a hunter’s trap, or snare imposed on the surface reminds me of a type of symbolic thinking. This thinking is developed, enumerated, and ultimately painted by a proliferation of map pins. They are hammered into the panel, ebbing and swaying across the surface of each painting, creating an abstracted layer of cartography. What seems to start as a practical decision to fix the subject to the surface develops into the point of the thing, or A point of the thing, or maybe the escape from the thing?

Whatever the intent, the pins kaleidoscope and undulate across the surface and in so doing reinforce the image. They add to the sense that the image is trapped and buried but they also develop and intensify it. Initially, I was seduced into admiring these paintings as beautiful things, and then after extended viewing, reached this idea that they hinge into something more than themselves. Then, after thinking about what this something could mean for a bit, I was then moved by the painting again. Another trap!

I often think about what I see as a really successful work of art and what it takes to make it. I keep coming back to the time and commitment it takes to make something. The process of making and thinking followed by more making and thinking takes time. The commitment plays a hand as an artist’s willingness to keep working. They are living and working through ideas and failing and repeating this and then repeating this again.

It is one thing to come up with a good idea and another to integrate that idea purposefully, and in a slightly unhinged way within a practice of making. James is perhaps best known for large pounded drawings and installations. They were room-sized labors that felt big, were big, and contained many parts; graphite, sound, speakers, and map pins, to name a few. For me, I get a sense that the labour and intensity of those site-specific installations have benefited from narrowing and focusing down in scale to these little gems of concentrated thinking and making.