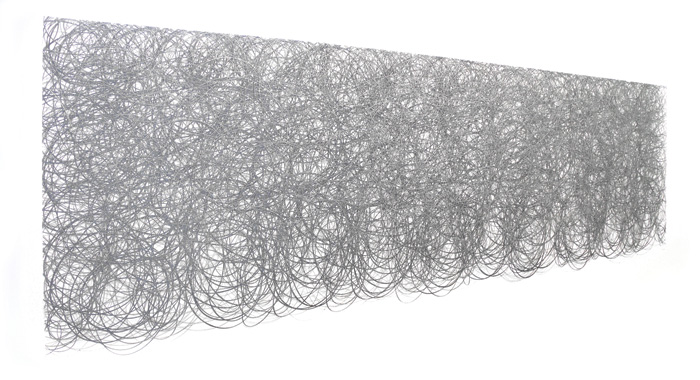 Once a mark exists on a page, for the most part that’s it. Erasing can make the pigment seem to disappear, but the impression the drawing implement has left on the surface remains. It usually cannot be moved around. Usually. Adam Fowler’s exhibition of new work titled Escaping Forward at Margaret Thatcher Projects offers one way to free the mark from it’s static position on the page.

Utilizing a cunning ability to compose marks in both two-dimensional and low relief space, paired with a zen-like concentration abilities and a steady hand, Adam Fowler frees the mark from the page with the help of a sickly sharp blade. Layers of mark making are then able to be placed over each other in space, laid one on top of another before being fixed into their eventual compositional home. The negative space has been separated from the mark, but it has not disappeared from view. One can even argue that the paper that has been cut away was only temporarily holding the space of the areas between Fowler’s lines. The removal of this dead paper has enlivened and lifted the mark to a more liberated state where its character is able to be recognized without need for registration to a superfluous, restrictive ground.

Working in this way for many years, Fowler’s work is seen to be growing steadily. Although one could never know this without seeing the new work, compositions have become more confident and engaging, feeling less calculated. The best example of this comes in Fowler’s wall installation named Untitled (41 Layers). In this piece the layers of unbound line work are further able to breathe in their unframed installation. Overlaid in a progression that expands horizontally, the work spans a distance of some 120 inches across the wall that confronts the viewer as they enter the space. The upper limits of the lacy layers of paper are aligned to mimic the rectangular shape of a frame while the bottom hangs free of delineation in a seemingly organic dispersion of looped line work. The work is almost imperceptibly fixed to the wall by incredibly minute insect mounting pins so that the work seems to hover magically, breathing ever so slightly at times with the caress of local air currents. The gorgeous fragility the work presents is able to be fully appreciated in it’s openness to the same air the viewer holds on baited breath.

The beauty of Fowler’s process is in the simplicity of his project being elevated to a heightened sophistication. Fowler is simply cutting out and rearranging marks in space, but the level of expertise that he brings to this task is what makes the work so engaging to look at. Lingering with the work is one of those pleasantly evolving viewing experiences where one is able to float in and out between wonderous marveling at the tightness of the artists control of hand and the joy of becoming lost following one gesture or another as they wind in and around each other, never seeming to begin or end. Countless artists have used these materials, and somehow none come to mind in relation to seeing the work in person.

Fowler is an artist’s artist. He has a supreme confidence and patience in his aesthetic pursuit that drives his work to levels of sophistication rarely reached by an artist of his age. The amount of time spent with each work and the complexity of the compositions seem to point to an artist far beyond his years. The work seems pointed in the right direction, and now that he has begun to work larger, in unframed wall based installation, the next works will definitely take time. Time is something that is on Fowler’s side. I can’t wait to see what’s next. If this show is any indication, it’s going to be gorgeous.