“On Metamorphosis and Transformation: The Blind Owl Meets the Hunger Artist.” 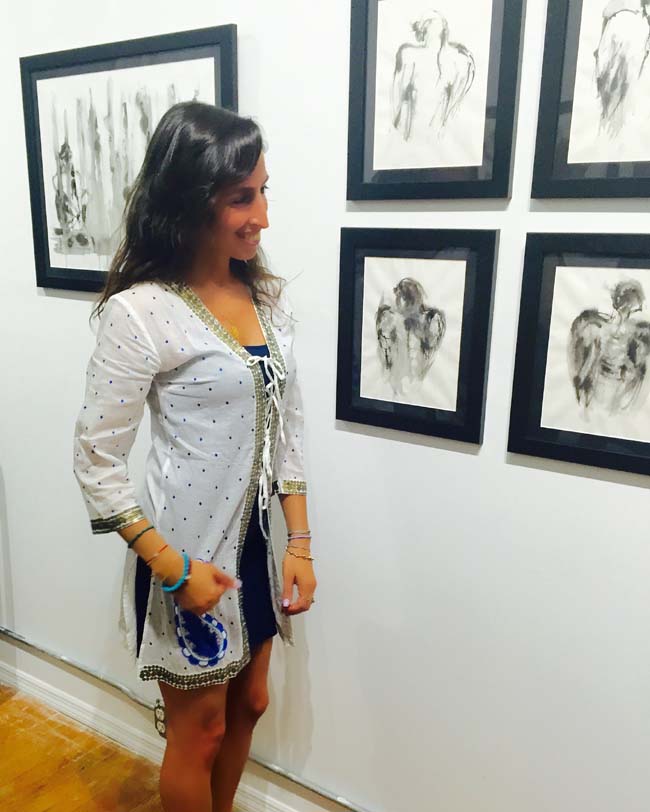 East Village’s popular Studio 26 Gallery which is located in the Eastvillager building on East 3rd St. between Avenues A and B, hosted an interesting artistic exploration by Aphrodite Désirée Navab–an ink drawing series, When Madness Meets Hunger, curated by Marika Maiorova. This conceptual project represents an imaginary encounter between the protagonist of Iranian writer Sadeq Hedayat’s novella, The Blind Owl, and the protagonist of Czech writer Franz Kafka’s short story, “The Hunger Artist,’ integrated by Navab.

Aphrodite Désirée Navab invited the audience to examine the similarities and differences that she found between all three artists and writers in the room, herself included. In answer to a question from the audience: “What if Kafka and Hedayat were alive and here in this room right now?” Navab answered, “I hope that they would not be horrified by my elementary level dialogue.” An artist and a writer herself, Navab’s response was both humble and modest. Her artistic work is anything but elementary—rather, quite sophisticated and eloquent. She earned her doctorate in Art Education at Columbia University in 2004 and received her BA magna cum laude in Visual and Environmental Studies from Harvard College in 1993. “This work comes from the place of incredible admiration,” Navab confides, something palpable to her audience. 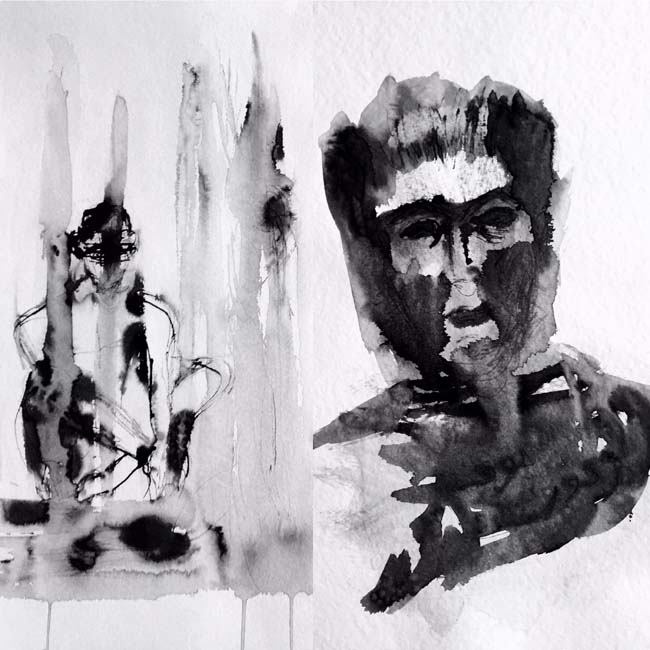 Since first reading “The Hunger Artist” at Harvard, and The Blind Owl on her own in her 20s, Navab kept thinking that these two writers and their protagonists need to have a conversation, because their struggles, although different, had enough similarities that a dialogue would be insightful. “The images and metaphors in these works were so vivid and gripping that they haunted my imagination for a long time,” Navab shared. It would take another 20 years before she would bring them together. And it’s no accident that she brings their issues to life today in NYC, in the present and in the current events of our particular existential experiences, whether be it global politics or the elections in the USA, or the refugee crises in Europe, STUDIO 26 gallery was the right platform for this context.

Franz Kafka (1883-1924), a Czech Jewish writer, living in Germany, writing in German, was dying of tuberculosis when he wrote this highly autobiographical story, which was published only after his death. It is a very allegorical and dark short story about a sort of performance artist who performs hunger as an art. Navab points out that it is “not a hunger strike or any kind of protest –the hunger artist wasn’t against anything in particular. Rather, he couldn’t find anything that would satisfy him.” The performance was the existential pressure of the artist hungering for an ideal that he never really reaches. On the other hand, this is a story about an individual who is marginalized and victimized by his society, facing the decline in appreciation of his craft. This archetypical creation by Franz Kafka could have been based on a true story as well. Hunger artists were performers who were common in Europe and America in the 18th through the early 20th centuries, who starved themselves for extended periods of time for the amusement of paying audiences. The phenomenon first appeared in the 17th century and saw its heyday in the 1880s. But the title of Franz Kafka’s story, which has been also translated as “A Starving Artist” soon enough became an enduring popular expression about an artist. 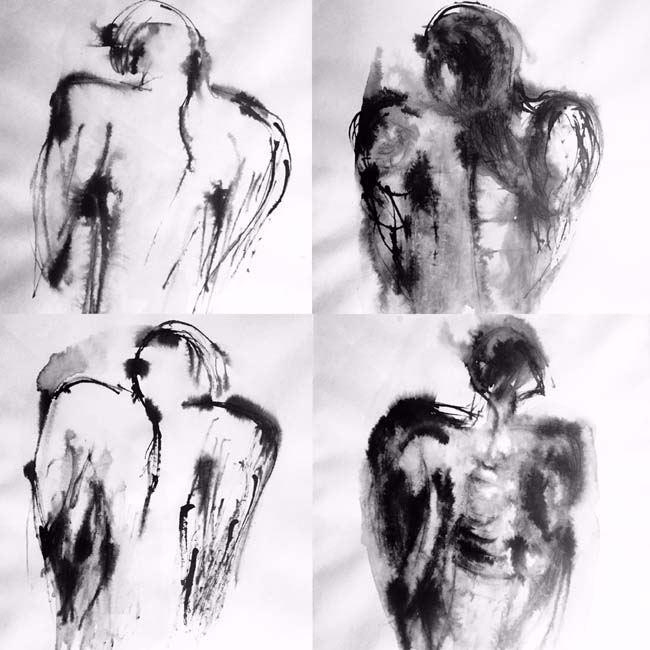 Most of us can relate to the hunger of the artist in quest of something he/she can’t quite satisfy. Navab made ink drawings of the hunger artist at different phases of his life: from when the public was extremely supportive of his art to abstract portraits of the artist transforming into a skeleton. In one of Navab’s most moving drawings, the hunger artist has disappeared altogether (after dying in his circus cage) and is replaced by a bloodthirsty, full of life, black panther who is not only hungry but very aware of what would satisfy his hunger.

Navab shared: “When the impresario of the circus asked the hunger artist why he felt compelled to fast all these years, the artist answered that if he only knew what would satisfy his hunger, he would be eating all the time, satisfied like anyone else. This is very poignant when one learns that Kafka wrote this story on his deathbed with tuberculosis on feeding tubes, no longer able to eat. The allegorical and metaphorical mirror the literal–Kafka’s own life.” What Navab’s art suggests is that the physical hunger of the allegorical character symbolizes the psychological and spiritual crisis of the writer himself. Kafka is the hunger artist. And we can relate to the hunger of the artist. 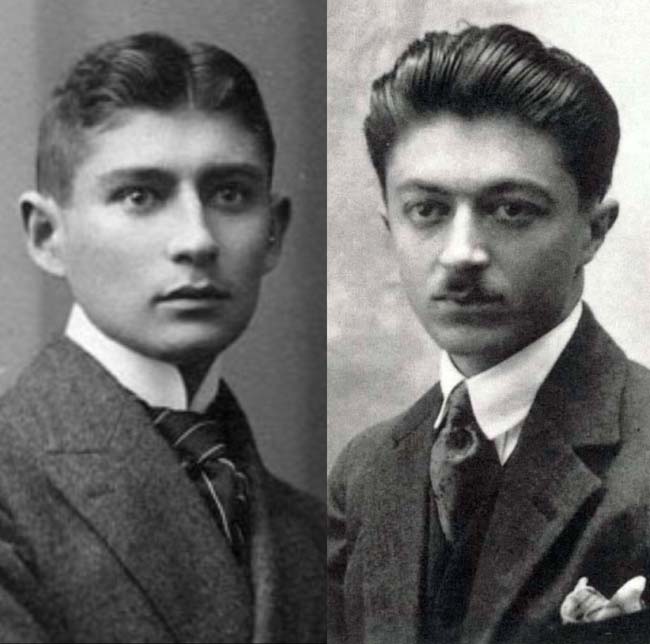 Kafka died in 1921 and influenced many artists and writers around the world. One of them is Sadegh Hedayat (1903-1951), one of the most important writers of contemporary Iranian literature, who was also known for translating the works of German writers like Rainer Maria Rilke and Franz Kafka into Farsi. Hedayat was very inspired by Kafka’s psycho-fiction which influenced his own writing style.

Throughout the curated show you can see Navab’s ink drawings of Hedayat’s novel, The Blind Owl. She portrays how the protagonist metamorphoses into his own shadow on the wall, which increasingly starts to resemble an owl who is blind. “Why blind?” Navab asks, “When owls are known to see extremely well? Because the owl who grows blind is very much the alter ego of the protagonist himself who is on opium and hallucinating. He is as unreliable a narrator as an owl who cannot see.” His obsessions about his wife cheating on him, his fears, his debate to kill her or not to kill her, immerses us into the madness of the protagonist as he is writing his story down. “When we find out that Hedayat himself committed suicide by gassing himself in a small rented apartment in Paris, we realize that the work is highly autobiographical, navigating his own madness,” Navab adds. 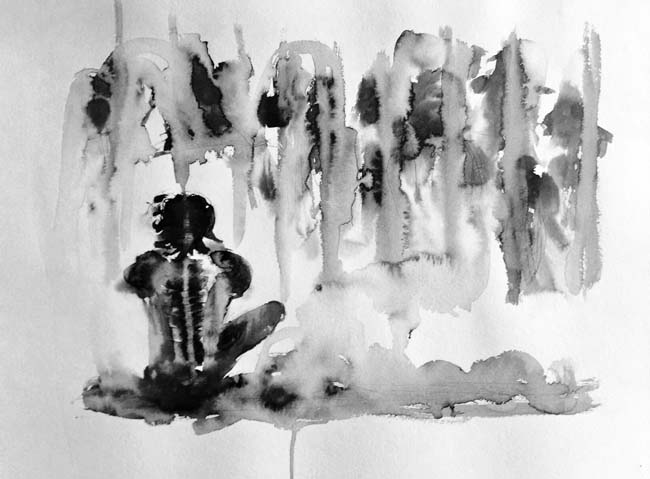 Navab uses the ink drawing medium to explore her concepts because it is very fluid and allows her to draw freely from both observation and imagination. She read works by both Kafka and Hedayat and researched their life stories and German and Iranian history. Both writers did not fit in with their place or time. Feeling alienated and marginalized, self-transformation and metamorphosis became a liberating concept for the writers. If you look closely at Navab’s drawings, you can recognize images resembling photographs of Kafka and Hedayat themselves.

Kafka died in 1924, Hedayat died in 1951, and Navab moved to the United States in 1981. Navab points out that roughly every thirty years there was a death and a rebirth for the artists as each one picked up the dialogue. She called her visual context: “a creative playground which rekindles the issues, concepts and struggles of both writers. The idea is to play with performance, rituals of sanity and insanity, hunger, transformation, metamorphosis in both texts.” 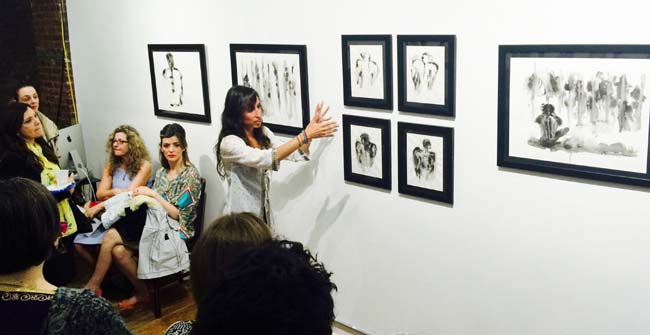 Navab comes from an extensive art background since she first began to draw as a child in Isfahan, Iran. She continued in Athens, Greece and then in New York City where she was first introduced to printmaking at The Dalton School. At Harvard she was first introduced to silver gelatin black and white photography. Her interdisciplinary dexterity shows in her exhibition where the images alternate between looking like monoprints or ink drawings or black and white photographs. Her art has been featured in over one hundred and fifty exhibitions and is included in a number of permanent collections including: The Lowe Art Museum, the Harn Museum of Fine Arts, Casoria Contemporary Art Museum, Naples, Italy, and the Museum of Fine Arts, Arkansas State University.

Navab was recruited by STUDIO 26 GALLERY in October, 2015. Her artwork has been represented by the gallery ever since, featuring the new series on its website; www.studio26eastvillage.com/dsire-navab-portfolio. Her work was exhibited by Studio 26 Gallery at the following fairs: Art on Paper, Art Basel Miami, December 1-6, 2015, and Art New York/Context, NYC, May 3-8, 2016.

Studio 26 Gallery exhibits international contemporary emerging and mid-career artists working in a wide range of mediums. One can stop by the Gallery to hear live music, sit in on a poetry reading, or view visual art that ranges from sculpture, to painting, to performance and more.

Exhibition “WHEN MADNESS MEETS HUNGER” was curated by Marika Maiorova who was born in Tbilisi, grew up in Moscow and lives and works in New York City and has had extensive experience in curating exhibitions and performance pieces internationally.